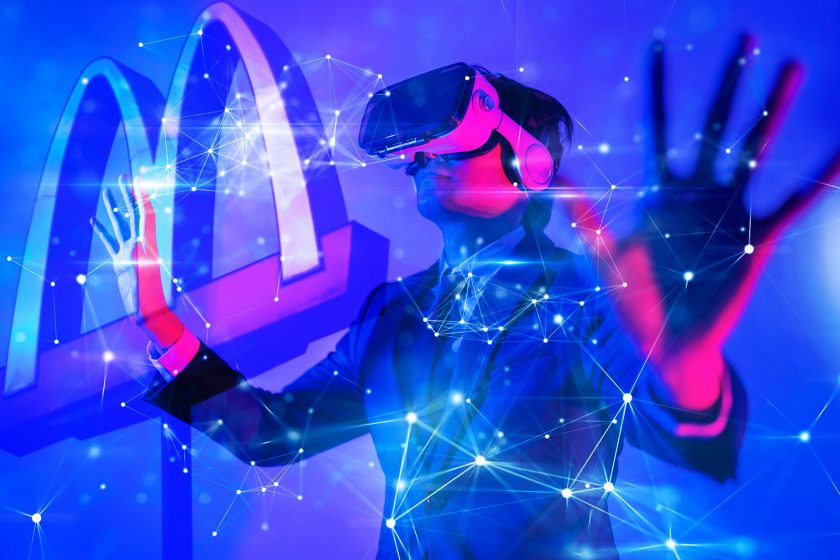 McDonald’s looks to be moving into the metaverse in a big way. That means fun ahead for players in the advanced digital world. And for franchisees, it means a boost to the brand: Metaverse experiences will cement participants’ loyalty and their association with McDonald’s as a hip, happening brand. In years to come, through avenues that are probably unfathomable today, the metaverse could be a key path for the golden arches to continue their dominance within the fast-food industry.

Innovation is nothing new to McDonald’s, of course. It recently introduced fast-food kiosks and an app to streamline food ordering. Those advances had roots back in 2014 when the company established a digital information team tasked with employing technology to improve dining, drive-through and delivery, according to a Forbes report.  And way, way back in 1976, McDonald’s embraced the drive-up window, a no-tech portal that accounted for 70% of its sales during the pandemic.

As it develops its metaverse presence, McDonald’s is poised for digital adventures taking a revolutionary turn. The potential may turn out to be immense.

What Is the Metaverse?

If you search for a metaverse definition online, you’ll see quite a complicated array. The meaning may evolve considerably over time, but here’s a capsulized version of a description in a Forbes Q&A article: The metaverse combines virtual- and mixed-reality worlds that are accessed by means of a computer browser or headset. Entering the metaverse allows participants, using avatars, to have real-time interactions and experiences even when geographically separated.

The same Forbes article attributes the buzz about the metaverse to the capability to own virtual objects, experiences and even land. If purchasing virtual land seems ridiculous, think about the early days of the internet, when visionaries snapped up domain names and later sold them for a big profit to slow adapters. The Forbes article cites this intriguing use of the metaverse, one that many businesses might emulate in the future: Sotheby’s “building” in Decentraland, where avatars can examine auction items ahead of the sale.

McDonald’s and the Metaverse

So what is McDonald’s likely to do in the metaverse? The corporation has applied for patents that hint at establishing virtual restaurants that will entice teenagers, thus enhancing the fast-food franchisor’s endurance for decades to come.

Right now, based on the Forbes report focusing on McDonald’s, the corporation expects people to virtually meet up at McDonald’s and order actual food to be delivered to their homes. (Other brands are also likely to have metaverse users place orders for merchandise.) Forbes says the burger franchise also will sell virtual goods such as branded clothing for avatars to wear and virtual furnishings for their patrons’ virtual homes.

Does McDonald’s Have an NFT?

And early this year, McDonald’s dipped a toe into the metaverse with a groundbreaking Chinese Lunar New Year celebration. Using AltspaceVR and Spatial virtual reality platforms, the metaverse experience showed 12 virtual zodiac sculptures representing symbols (such as snake, goat, dog) for the year of a person’s birth as outlined in Chinese culture.

Wendy’s in the Metaverse

The rival burger franchise Wendy’s already has established a presence in the metaverse, as reported by Business Insider. The Wendyverse Town Square depicts a restaurant accessible with a Meta Quest 2 device ($300), according to a Business Insider report. Users sit at tables after receiving virtual food; they can go behind the counter to experience Wendy’s as an employee. Users can order real food, too.

To compete in games with prizes at stake, users can amble over to Wendy’s Buck Biscuitdome in Partnership Plaza. They can play basketball with a Baconator and can win food from a brick-and-mortar Wendy’s restaurant.

If a customer doesn’t own a Meta Quest 2, he or she can view the virtual world at Wendyverse.com.

Fast-Food Restaurants and the Metaverse

McDonald’s and Wendy’s aren’t the only fast-food restaurants entering the metaverse. Although Chipotle and Panera aren’t franchises, their pioneering trial-and-error efforts could refine best practices for other restaurants and non-restaurant businesses. Chipotle has already entered the fray; Panera has signaled its interest.

Chipotle opened its interactive metaverse restaurant (Roblox platform) for Halloween 2021, according to the Business Insider report. Avatars could don themed costumes such as burrito mummy and Guacenstein characters. Users could search for hidden goodies in the Boorito Maze, and thousands of players were awarded codes for free burritos to redeem in physical restaurants.

In April 2022, Chipotle launched a ’90s-themed restaurant (the chain launched in 1993) where metaverse users could sample a bit of nostalgia. During this metaverse experience, players opt to fulfill customer orders. If they roll burritos successfully, they win game currency: Burrito Bucks.

The Panera chain appears to be revving up for the metaverse, too. It applied for a Paneraverse trademark earlier this year, Business Insider said.