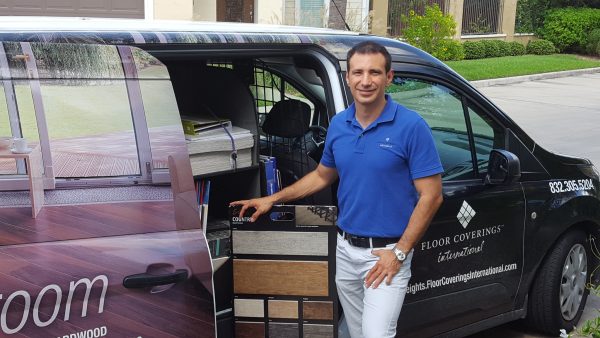 Most Americans dream of financial independence: the ability to attain the quality of life they desire and cover their expenses, with no anxiety attached. They have disposable income and can spoil themselves and their loved ones… at least a little. For those who take the plunge into franchise ownership and follow the franchisor’s proven formula for success, that financial comfort zone can become a happy reality.

Reinel Solano, a Texan who has operated his busy and growing Floor Coverings International franchise for more than five years, is a case in point. Solano made a stark career shift with his franchise. He had spent 10 years in the oil and gas industry, ultimately working as a team leader in reservoir engineering. “I was in charge of creating the development plans for oil and gas fields,” he says. Solano turned his back on a corporate career because he wanted to control his financial future rather than stick with an industry that waxed and waned with the volatility of the U.S. economy. He has that control now that he’s a franchisee.

Solano’s Floor Coverings International Houston Heights location opened March 1, 2016. “Having my own business gave me a sense of purpose where I can be in control of my destiny,” Solano says. “I have been able to create employment for many people. I like having a business that treats employees, contractors, and customers with a high sense of integrity. That makes me proud of what I’ve accomplished.”

He employs two design associates and a project coordinator, and he gives assignments to 15 to 20 more people on eight contracting crews. Solano wears many hats and appreciates being part of a franchise team. “As a business owner, I must address the concerns of my customers, employees and contractors, and understand finance, marketing, human relationships, business planning and technology. Being part of a franchise gives you a heads-up against the competition because they provide the guidance to make your business better than others.”

Solano admits there are challenges to owning a highly customer-focused business. “You have to be willing to work 50 to 60 hours per week to succeed. It takes time and trials and errors to find the right balance to be profitable, have the right team, and sustained revenues — factors that are key to financial independence. I am on a good track to get there,” he says.

What food franchises does Shaquille O’Neal own? 4166

Why is Chick-fil-A better than McDonald’s? 2849