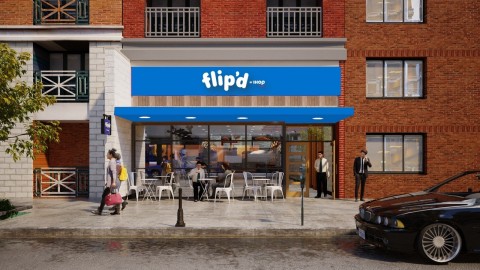 IHOP announced its Flip’d restaurant concept in 2019, and now the first one has finally opened – flipping buttermilk pancakes and more – in Lawrence, Kansas. The new restaurant is relatively cozy at only about 3,500 square feet and can seat 55 people. There is no table service, but like most of the established fast-food restaurants that it will compete with, there is a drive-through lane. Its bread and butter may well be delivery and takeout orders, which can be placed from a digital kiosk near the doorway, at the restaurant’s counter or from a web-enabled device.

The menu stakes out new territory with pancake bowls that can be customized with the addition of toppings such as sauces, berries, scrambled eggs, bacon and cheese. Customers also can indulge in a build-your-own bar stocked with pancakes or oatmeal as a base that can be tailored as desired with items such as chocolate chips and various fruit options. The Flip’d menu features sandwiches, burritos and egg dishes, too, and there are pastries, salads and wraps prepared as grab-and-go options. As with IHOP, its breakfast menu is available all day.

IHOP President Jay Johns says that Flip’d will elevate the fast-food options for busy people. “Millions of Americans are settling for subpar breakfast foods that are either microwaved or have been sitting under a heat lamp because they’re forced to grab something while at their usual coffee spot,” Johns said in 2019 when announcing Flip’d. “With Flip’d by IHOP, guests don’t have to compromise. Now they can get freshly made, all-day menu items … for a good price and in a matter of minutes.”

Flip’d and IHOP are part of Dine Brands Global, which is also the parent of Applebee’s Neighborhood Grill + Bar. IHOP has some 1,700 restaurants worldwide, and Applebee’s has a total of about 1,600 company-owned and franchisee sites.

The next Flip’d is expected to open soon in New York City; it will be about half the size of the Kansas restaurant at a mere 1,800 square feet and with seating for only 25 customers. Future franchisees can build a site from scratch or convert an existing location. Dine Brands is targeting mid-size markets such as Columbus and Dublin, Ohio, as well as big cities for its franchises.

Covid-19 upended IHOP’s plans for Flip’d. It was originally scheduled to debut the concept in Atlanta in spring of last year, with follow-up expansion sites in Denver, New York City, San Francisco and Washington, D.C., also during 2020. Observing customers’ pivot to takeout rather than dining-in during the pandemic helped with the design of Flip’d to meet evolving preferences, according to the company.

The International House of Pancakes was founded in 1958 in Los Angeles and began franchising in 1960. During a 1973 marketing campaign, the name IHOP was introduced. The brand is headquartered in Glendale, Calif.