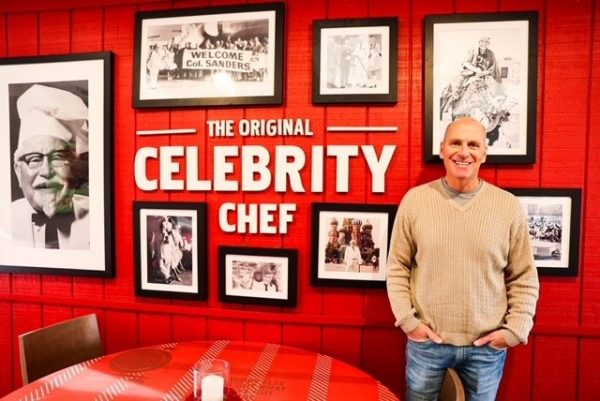 For 70 years, the Kentucky Fried Chicken (KFC) franchise has served Colonel Harland David Sanders’ world-famous chicken recipe of 11 herbs and spices. The company has grown to more than 24,000 locations in over 145 countries and territories globally, leading to the success of countless franchise owners.

One of these franchise owners is Denis Schoenhofer, a second-generation KFC franchisee. His father, Chuck Schoenhofer, owned the Kau Kau Korner in Wichita, Kansas, and became one of the state’s first franchisees. Growing up in the business, Schoenhofer followed in his father’s footsteps and now operates 36 KFC franchises in Kansas, Oklahoma, Texas, Colorado, and New Mexico. He also has aspirations of third-generation franchisee-family ownership by working side-by-side with his children, Samantha and Cameron.

Over the years, Schoenhofer has grown to love working with the chicken franchise and has several favorite aspects to it. “The people that I have met in my years as a KFC franchisee are my single-most favorite aspect, from the comradery of fellow franchisees to working with KFC leadership over the last 30 years. I have invested a great deal of time getting to know other franchisees and consider them to be not only valuable business resources but more importantly, life-long friends,” he said. On the corporate side, he enjoys working with franchisee business coaches in particular.

He also finds franchising to be an addictive process. ”Once you’re in, you will always want to be in. Maybe it’s more of my generation, but I enjoy it to the point that it was natural for me to encourage my kids to become involved in KFC and to chart their own paths. Honestly, it’s enjoyable,” he said.

The benefit of a franchise is that it is a proven concept. However, to be successful, it takes hard work.

For prospective franchise owners looking to invest in KFC, he suggests that they put in hard work and not get complacent with its proven system. “There is a pervasive misconception that a franchise is a turnkey, and it’s simply not true. Specifically, with KFC, you must plan on working. The benefit of a franchise is that it is a proven concept. However, to be successful, it takes hard work,” he said.

Lessons of a Young Franchisee

Schoenhofer has vivid memories of growing up with Colonel Sanders as a member of his extended family. It was not unusual for the Colonel to regularly visit his home and attend dinner parties. The Colonel and his father have taught him many lessons and provided valuable insight, especially as a young franchise owner. The Schoenhofer family is part of the Colonel Sanders’ story.

“I stole as much time as I could from the ‘elder statesmen’ of KFC. They were the encyclopedias of knowledge, so to speak. By making every effort to get myself on to the various KFC franchisee boards they were on, I could pick their brains for every single tidbit of wisdom and knowledge. I’ve found that people often want to be on boards so they can hear themselves talk. I’m not trying to pat myself on the back, but I saw it as an opportunity to learn from the best,” he said. From them, he learned that the new and clever ideas weren’t always the best. “It’s the true and proven knowledge that you can learn from an elder statesman.”

All franchise owners will face hardships. As a franchise owner struggles along the way, he feels that it’s essential to stop and reflect on the lessons that you’ve learned. ”That strategy has afforded me the chance to adjust my perspective. When you recognize the sacrifice of time and energy that you’ve made, you begin to decide how to prioritize your time. You still pour your heart and soul into it, but not everything is worth it. Don’t bite off more than you can chew — it will drain you,” Schoenhofer said. “Recognize the value of your time and energy and never make decisions based on vanity or ego or you will pay for it in the long run.”

KFC and the Colonel Sanders Story

Schoenhofer is proud to see his children following in his footsteps of KFC ownership. ”It is an honor to be able to give them the opportunity to be where we are today. I can clearly see the connection between my father and my children because the reward comes from the sacrifices that he made,” he said. “There was a time when it didn’t look like my kids would be involved and yet here they are. So it’s hard to say whether it will continue into the fourth generation. You just never know.”

As the KFC franchise has grown, the Schoenhofer family has grown with it, and they are guided by their principles that will ensure growth and expansion for future generations. Growing up with Colonel Sanders has taught them countless lessons they wouldn’t have learned otherwise. The family is proud to be part of the Colonel Sanders story.