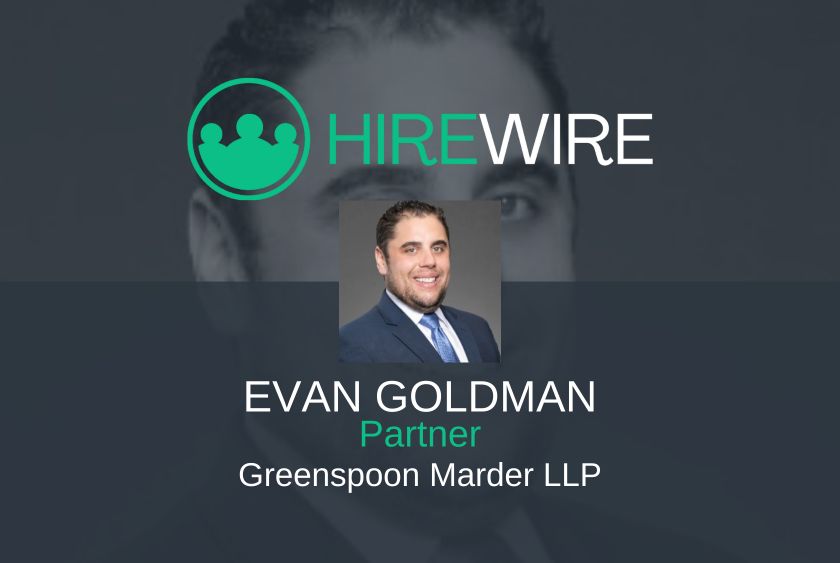 Evan Goldman is now a partner in Greenspoon Marder’s newly launched franchise law practice group. He joined the firm as a partner in its Edison, N.J, office and will be an integral part of starting and growing the firm’s franchise law practice along with four other attorneys. As an expert on franchises, he works with franchisors and franchisees to draft, negotiate, and register key documentation, like the Franchise Disclosure Document (FDD) and franchise agreements.

“I’m humbled by the opportunity to work at Greenspoon Marder LLP, a national firm with a stellar reputation. The ability to expand my team (which already includes Brett Buterick) to Adam Wasch and Natalie Restivo, based in Boca Raton, is tremendous and exciting. The future for our franchise practice is bright,” Goldman said in a statement.

Beyond his transactional work, Goldman is also a seasoned litigator and was formerly a partner at A.Y. Strauss, LLC in Roseland, N.J. He led the firm’s franchise and hospitality practice group and was a member of the firm’s litigation group. With the group, he worked on business litigation matters, including labor, construction and discrimination lawsuits, as well as partnership disputes. Goldman has extensive experience advising clients in the hospitality industry. He represented clients inside and outside of the hospitality and franchise industries in state and federal trial and appellate courts in Pennsylvania, New York, New Jersey, and the District of Columbia.

The Journey of a Franchise Attorney

In terms of getting into franchise law, Goldman’s journey goes back a decade ago, somewhat accidentally, working for a small firm in New Jersey. With Greenspoon Marder, he saw an opportunity to do something bigger. “In terms of Greenspoon Marder, I was looking for an opportunity to work for a national firm, given we represent over 100 franchisors nationwide, and this seemed like a great opportunity. It also allowed me to work with my good friend, and the practice’s chair, Adam Wasch, who is based in the firm’s office in Boca Raton, Fla.,” he said.

Interestingly, Wasch was Goldman’s adversary five years ago in a franchise dispute. Since the end of that dispute, they’ve talked about working together. The firm’s franchise law practice group is the culmination of those discussions.

With over a decade of franchising experience, Goldman finds franchise law to be very rewarding. “Helping people realize their dreams is an amazing part of franchise law. Whether it’s a prospective franchisee looking to become their own boss, or a franchisor with a great concept they’d like to expand, franchising is the essence of the American dream,” he said.

In addition to Goldman, Adam Wasch, Buterick, and Restivo, Joseph Wasch from Greenspoon’s Boca Raton office rounds out the group of five. These attorneys have decades of experience representing franchisors at all stages, from startup to maturity. The group is also experienced in providing growth opportunities and international expansion and advising entrepreneurs on federal and state regulatory matters. According to Adam Wasch, the group will work to help emerging brands expand across the country.