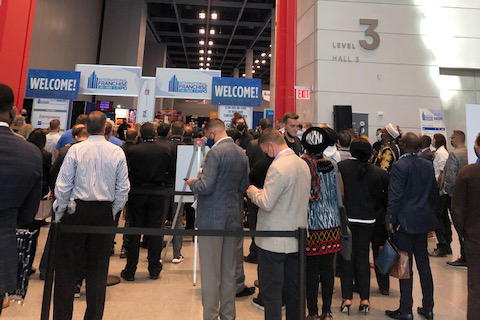 I recently attended the International Franchise Exp (IFE) held at the Jacob Javits Center in New York City. It was so great to walk those hallowed halls again and meet with people in person. Upon viewing the map of over 150 exhibitors, I made a beeline for the emerging franchises section. This sector is near and dear to my heart. I was one of the first franchisees of an emerging franchise years ago.

I went booth to booth and met with founders and representatives from all of the newly-franchised brands. I listened as they told me about their concepts and how they came to be. As I talked with them, I couldn’t help but wonder which ones will be the “next big thing.” I find emerging franchise brands so exciting. When you think about it, every big-name franchise concept started somewhere — as an emerging franchise brand.

Orthotic & Prosthetic Clinics of America: Based in New Haven, CT, this emerging franchise provides a much-needed service for those with disabilities. They take care of accreditation, insurance billing, cost of goods sold, and the business set-up so clinicians can focus on superior patient care and satisfaction.

Birdie’s Auto Spa is a mobile car detailing service. Named after the Founder/CEO, Eric Birdsall, this concept has a low startup cost and is a certified green business. Using steam to sanitize vehicles inside and out, they have saved millions of gallons of water. In fact, they only use one gallon of water per vehicle. Even better, there is no soap or harsh chemicals needed. Since it is a mobile concept, this service can be brought to the customer’s driveway or office parking lot.

Emerging franchise brands have their risks and rewards

There are several advantages to investing in an emerging franchise. Most notably, prime territory locations are available. There is also an opportunity to develop a close working relationship with the executive team, the potential to have a seat at the management table, and the opportunity to have input on the brand’s development. Many early franchisees are called upon for input on the business model. They can weigh in on what is working and what needs improvement. Also, there may be more room for negotiations. With the help of a franchise attorney, early franchisees have a better chance of receiving modifications to the franchise agreement.

Investors with high-risk aversion tend to avoid the emerging market segment. They may prefer something that has more of a solid foundation and a proven history. An emerging franchise may not be SBA-registered which will make funding more challenging. There also may not be enough financial information to support an Item 19, which contains earnings potential. In addition, an emerging franchise may not have replicated its model in enough areas around the country to prove that it truly can work anywhere.

Only time will tell if these fledgling franchisees have what it takes to survive and grow. I’m already looking forward to IFE 2022 to see what new concepts will be exhibiting next year!

“This world is clearly emerging before our eyes. The shifts ahead, the opportunities ahead are massive.”