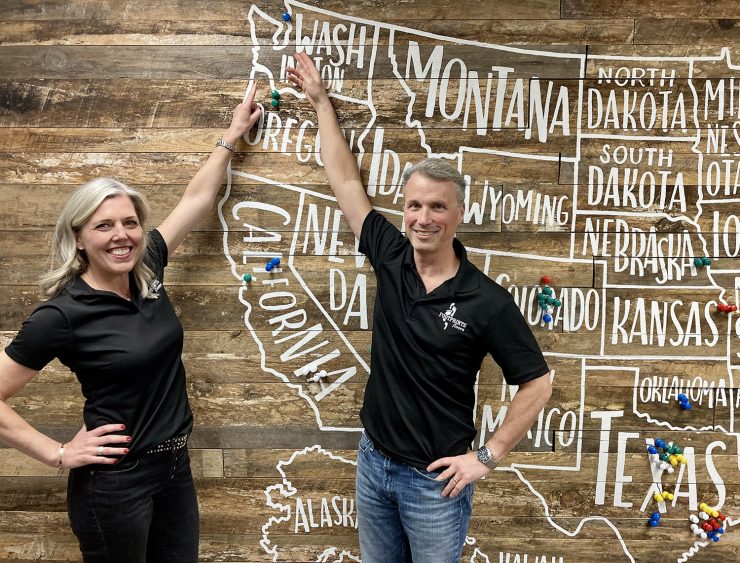 Navy veteran Nate Yarusso recently became a Footprints Floors Franchise Owner in Washington state after years of introducing the brand to his franchise consultant clients. Why did this Navy veteran and franchise industry expert decide to take the leap into franchise ownership with Footprints Floors? For Yarusso, it was simple: He knew a good thing when he saw it.

Prior to getting started in the franchise industry, Nate spent a fulfilling career in the U.S. Navy, spending 20 years as a jet pilot on aircraft carriers and a helicopter pilot. In a recent interview with Denver-based franchise development agency Raintree, Nate mentioned that he retired from the Navy 10 years ago and worked as an airplane pilot for a private company. Following that, he served as a pilot for an airline that flies government contracts overseas, essentially in high-risk areas.

That’s how he initially became interested in the idea of flying jets. Throughout his life, he was always away from home and his family, inevitably on special occasions and during holidays too.

In 2021, he started looking for a different career path that would allow him to stay at home, and that’s when he became a franchise broker. That was the beginning of Nate’s journey towards Footprints Floors.

What Do Franchise Consultants Look For in a Flooring Franchise?

Nate first learned about Footprints Floors as a franchise consultant. The company consistently came up as a great option for many reasons: Low cost of entry, recession-resistant, in-demand service, multiple revenue streams. After recommending Footprints Floors as a sound franchise investment with a groundbreaking model to multiple clients, Nate realized the high-growth potential of the company, especially since the brand has grown exponentially and had a lot of successful Franchise Owners in just the past few years. He also liked the Footprints Floors’ corporate support team. “The culture Footprints Floors has created, with a family-like feel, is unlike any other brand I’ve come across,” he said.

In fact, the company’s expansion to over 30 states in just a short span of three years is one of the reasons Nate became interested in the prospect of becoming a Franchise Owner in the first place. After seeing the company’s high growth potential and suggesting it as a lucrative investment opportunity to many clients, Nate decided to take the plunge himself.

What Drew Nate and Sarah Yarusso to Flooring Franchise Ownership?

Nate described franchising as a better option than starting your own business because building a business from scratch is a solitary process. You’re on your own, and a lot of trial-and-error comes into play.

But when you become a Franchise Owner, most of the mistakes startups commonly make ”have been ironed out,” as he puts it. Since there’s a readily available process for everything, including marketing, lead generation, and SEO, you don’t have to start from scratch.

Having worked as a franchise broker himself, Nate knew that his chances of success were much higher with a franchise since he would already be years ahead of an entrepreneur who had just begun to build a brand. When searching for franchises, he looked at handyman and home improvement type companies mainly because those are the kind of services he believed his community needed.

Footprints Floors came as a natural option to him for many reasons. Here are some of them:

Personal Preference: Nate believes that wood is a stunning attribute for any home. It also has a sense of nostalgia for him since he and his father would bond over building furniture and doing home improvement tasks together. The idea of bringing the same accented beauty to other people’s homes excited him. Since Footprints Floors is known for providing quality flooring that adds value to people’s homes, Nate knew it was the one.

Service-Based: As a franchise consultant, Nate learned that service-based franchises have a higher chance of succeeding. That’s why he wanted to opt for a service-offering company.

Sustainability: Another important component of a successful business is the ongoing need for its product or service. Nate believes that as long as there are homes, there will be a need for flooring service. The housing industry also has a large customer base, which ultimately ensures a constant influx of clients.

Family-Like Culture: After meeting with Bryan Park, the Founder of Footprints Floors, Nate realized that the owners’ and top executives’ active involvement in the company’s operation is one of the reasons behind its success. He was immediately drawn to the family-like culture since it was something ”unlike any other brand” he had come across. All in all, the combination of the executive finesse with the sustainability of the service provided by Footprints Floors is what made Nate believe that this is a company that’s certainly going to do well.

A Peek Into the Future With Footprints Floors

When asked what excited him the most about being a Footprints Floors Franchise Owner, Nate said that he dreams of having a thriving business helping people beautify their homes. After seeing that Bryan Park was personally dedicated to making the company a success, Nate felt quite reassured.

The assurance coupled with the company’s high-growth potential made him believe that Footprints Floors is something he wants to be a part of for the long run. He looks forward to working with clients who share his vision of using beautiful flooring to improve the aesthetic appeal of a home.

Moreover, he is ecstatic about the idea of having more control over his schedule. Previously, Nate had to work overseas, which meant being away from home for long periods. But now, he can spend time with his family.

As for Footprints Floors, the corporate team is extremely excited to see what Nate brings to the table with his unique franchising expertise and insight. Footprints Floors offers a robust and comprehensive support system to Franchise Owners, giving them access to flexible working hours, low entry costs, and a fully-staffed call center to handle lead generation, appointment scheduling, and more. Since these are exactly the things Nate wanted from his new business investment, it will be exciting to see him find success and fulfillment!

Alana Willis
Alana Willis has more than a decade of content writing experience. She has spent the last three years immersed in the world of franchise marketing as the Content Specialist for Raintree, a Denver-based franchise development agency. When she's not writing, she enjoys spending time at home with her husband, son, and two "fur kids."