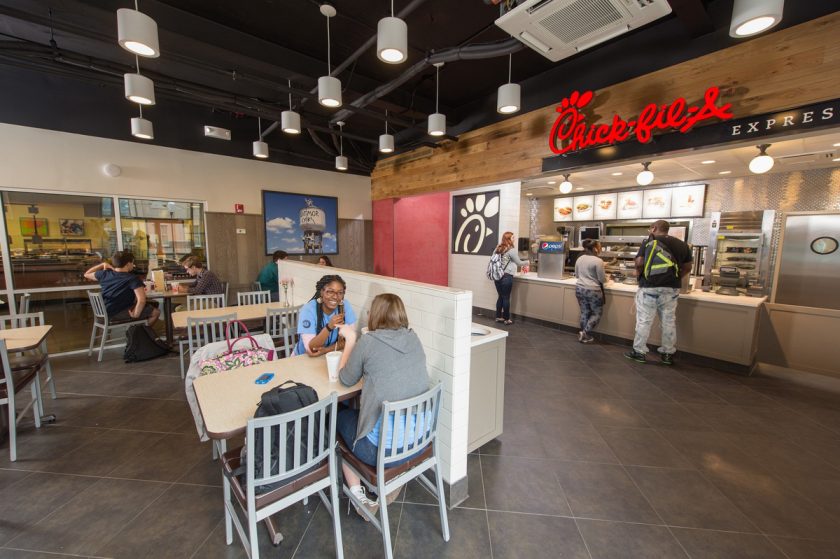 On many U.S. college campuses, food franchises are siphoning business away from regular college dining halls. It’s been happening for quite a while; as a freshman at Texas A&M University in 2005, my daughter spent a large chunk of her meal plan budget getting food at a Chick-fil-A operating in the commons area of her dorm. And Chick-fil-A is not the only food franchise that’s luring students away from the college dining halls.

Diverse franchises operate on college campuses around the country already and more are in the works. For instance, Roy Rogers recently saddled up at the University of Maryland in College Park. The company has announced plans to open a 1,200-foot site there by the end of this year. The fast-food restaurant will offer its standard fare of roast beef sandwiches, fried chicken and burgers, in the campus food court. The breakfast menu will include its popular egg, ham and cheese biscuit. A campus advisory board made up of faculty, staff, students and alumni approved the restaurant on the basis of its fast service, low prices and menu variety, said Joe Mullineaux, a senior associate director at the school.

It’s likely to be the first of many such sites, Vice President of Franchise Sales Gregg Koffler said in announcing the future restaurant. “Roy Rogers is expanding rapidly, and after previous success with nontraditional locations, we knew the University of Maryland would be a great place to grow,” Koffler said. “This new location is just the beginning of Roy Rogers’ expansion to college campuses.” Based in Frederick, Md., western-themed Roy Rogers was founded in 1968 and has 24 franchises and 22 company-owned restaurants in six states.

So why are university sites a good bet for food franchises? On its franchise information website, Great American Cookies pitches on-campus locations based on their steady, all-day foot traffic, plus young adults’ love of desserts.

Jersey Mike’s is another franchise that’s bullish on college campuses. It’s already got shops at seven campuses, including Purdue University in Indiana, and Seton Hall, Montclair State and Rider universities (a ghost kitchen there) in New Jersey. And a site on the College of New Jersey campus was due to open for business at the start of the fall 2021 semester.

Human Bean, a coffee house franchise, has a site on the Southern Oregon University campus, in a library. Imagine the popularity during mid-terms and finals!

One tip mined from franchisetimes.com is that franchises will benefit by qualifying for the meal plans sold by colleges. To become a meal-plan option, franchises can negotiate directly with the appropriate campus governing body or team up with a mega-company such as Aramark, Compass or Sodexo to blaze the path.