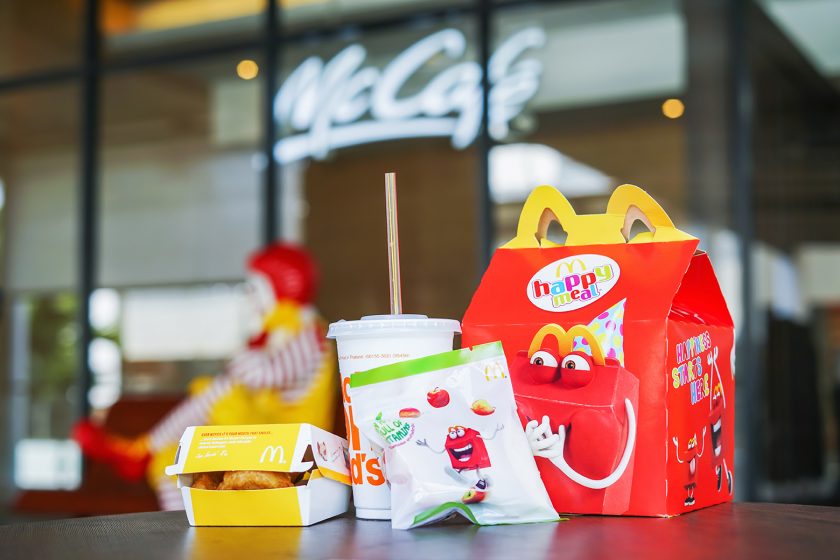 McDonald’s to eliminate plastic toys from Happy Meals by 2025

As bad news continually emerges about climate change, fast-food restaurants are stepping up their sustainability game. McDonald’s is the latest company to make a major change: On Sept. 21, the brand announced plans to phase out plastic toys in Happy Meals globally by the end of 2025. Instead it will offer playthings made from recycled or bio-based and plant-derived materials.

If McDonald’s follows the playbook that’s already in place in the United Kingdom, France and Ireland, it will use soft toys, paper-based toys and books as alternatives. The fast-food giant also is investigating whether its serving trays and playground equipment can be made from recycled plastic toys.

The company sells some 1 billion of the kids’ meals each year, according to online reports. This new eco initiative will decrease the virgin plastic it uses by 90% each year compared to 2018. The company said this reduction equals more than 650,000 people dropping all use of plastics annually. McDonald’s executives told Nation’s Restaurant News that they plan to make the sustainable toys cost-neutral for franchisees.

The golden arches do not stand alone in initiatives to battle climate change.

This spring, Burger King launched a green packaging pilot program in 51 Miami restaurants that will examine scalable solutions for eating utensils, straws, drink lids, Whopper wrappers, napkins and more. The alternative options are made of renewable paperboard and plant-based plastic.

Burger King also is giving paper straws and straw-less lids a tryout. If plastic straws are eliminated at its restaurants, the practice could remove as many as 500 million single-use plastic straws per year from the waste stream and remove 910 metric tons of greenhouse gasses per year. After the pilot project ends, Burger King will apply the results to its sustainable packaging plans for the next year.

In April 2021, Chipotle Mexican Grill reported on its sustainability achievements, with 51% of its waste diverted via its recycling, composting and waste-to-energy programs. Along with the release of this report, the company announced goals of trimming overall waste by an additional 5% by 2025, as compared to 2020, as well as undertaking a pilot program that reduces plastic starting this year.

Also in April, Taco Bell announced it would recycle its hot sauce packets.

Yes, they’re small, but they really add up… as in 8.2 billion packets used per year.

An executive with franchising newbie Wake Oasis Coffee said the brand would reuse shipping containers to construct drive-through sites in its nod to sustainability.  (North Carolina-based Wake Oasis Coffee was cleared to sell franchises in 28 states in September 2021.)

In case you’re wondering, Foodbeast.com and Workstream.us have evaluated fast-food brands for environmental responsibility and sustainability. In February 2021, Foodbeast gave its top-10, with Chipotle No. 1. Next were Rubio’s, McDonald’s, Jimmy John’s, IKEA’s cafeterias, Shake Shack, Starbucks, Subway, Taco Bell and White Castle at No. 10. Workstream ranked seven fast-food brands, with McDonald’s in first place. The others were (in order) Subway, KFC, Taco Bell, Chick-fil-A, Starbucks and Pizza Hut.