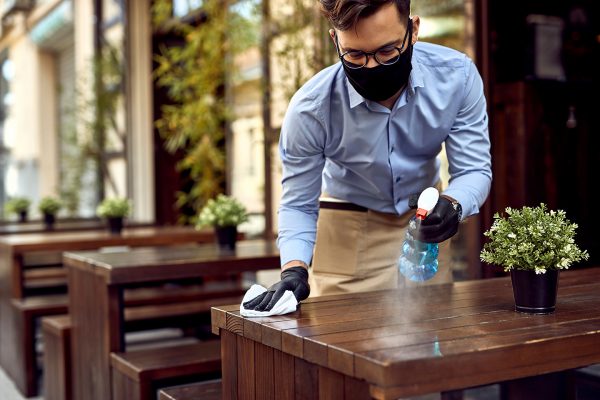 Worried about soaring infections, consumers are opting out of dining in

My household has a habit that’s trending: We’re not eating in restaurant dining rooms. In 100-degree weather this week, we sweated it out on the patio of a casual French restaurant rather than dine in air-conditioned comfort. And for at least 95 percent of our meals, we are forgoing restaurants altogether and cooking at home, even though we’re fully vaccinated.

A National Restaurant Association survey, detailed by qsrmagazine.com, confirms that we are not alone in our response to the surge of the highly infectious Covid-19 Delta variant. Some 60% of adults responding to that mid-August survey stated that they altered their restaurant habits because of dear ol’ Delta. Of the roughly 1,000 American adults surveyed, 19% stated they’ve stopped going to restaurants and 9% canceled plans to do so.

“A majority of consumers have changed their dining behavior in a manner that is beginning to put acute pressure back on the restaurant industry,” Sean Kennedy, executive vice president-public affairs of the National Restaurant Association, told leaders of Congress in a letter.

Besides curbing their tendency to dine inside restaurants, 37% of respondents said they instead ordered takeout or delivery; 19% said they opted to dine outdoors. On the flip side, 41% said they hadn’t modified their restaurant habits, with that group largely composed of baby boomers and folks in the Republican camp.

Delta slammed restaurants, many of them franchises, just when you thought it was safe to dine in again.

Although my spouse and I fall into the boomer demographic – but with independent streaks in our political leanings – we have a healthy respect for Delta. Or fear, perhaps. After all, by late August, the variant caused nearly 99% percent of U.S. cases, according to the Centers for Disease Control and Prevention. August has been the third-worst month for Covid this year, barely lagging the dreadful statistics of January and February.

Delta slammed restaurants, many of them franchises, just when you thought it was safe to dine in again. The industry pretty much took an 8-count for nine months of 2020 but pulled itself off the mat this spring, with many receiving big-time help from the Restaurant Revitalization Fund. But hand-wringing has resumed, with the National Restaurant Association seeing “full-service restaurants facing the greatest threat from new government restrictions in response to the Delta variant.”

The association’s survey had some interesting statistics in regard to those government restrictions, too. For instance, about a third of those surveyed (many of them Republicans, Gen Xers and rural dwellers) disclosed that a mask requirement would discourage them from dining indoors. But here’s an interesting wrinkle: Approximately one-fourth of the respondents (a lot of them Gen Z adults and Democrats) said a mask requirement would make them more likely to go out. And 43% said masks didn’t sway their decision-making.

When queried about vaccines, roughly a third (tilted toward Gen Xers, rural residents, Republicans and independents) said they would probably stay away if vaccination proof was necessary to eat indoors. But about the same percentage (mostly Democrats, Gen Z and higher-income households) saw the requirement as a plus. Others surveyed said a vaccine requirement didn’t matter one way or the other. (Side note: New Orleans, New York City and San Francisco have instituted vaccine mandates for restaurant clientele dining indoors and for restaurant employees because of Delta.)

The tendencies documented by the survey weigh heavily on the industry, which has experienced shortages and price increases in key commodities while being challenged to fill staff openings. I’m hoping the industry can pivot again, as it already has by multiplying drive-through lanes; expanding curbside pickup; innovating with online ordering; increasing the use of touch-free processes, switching to one-time use items, ranging from menus and utensils to condiment packets; and getting on the bandwagon of delivery services. After all, my husband and I love feasting on a meal that we can’t prepare ourselves. We feel pampered to have food brought to our table and avoid kitchen cleanup.

We’ll return to these indulgences when danger abates. We’re just not feeling it right now. And as I noted before, we are not alone.

What food franchises does Shaquille O’Neal own? 4159