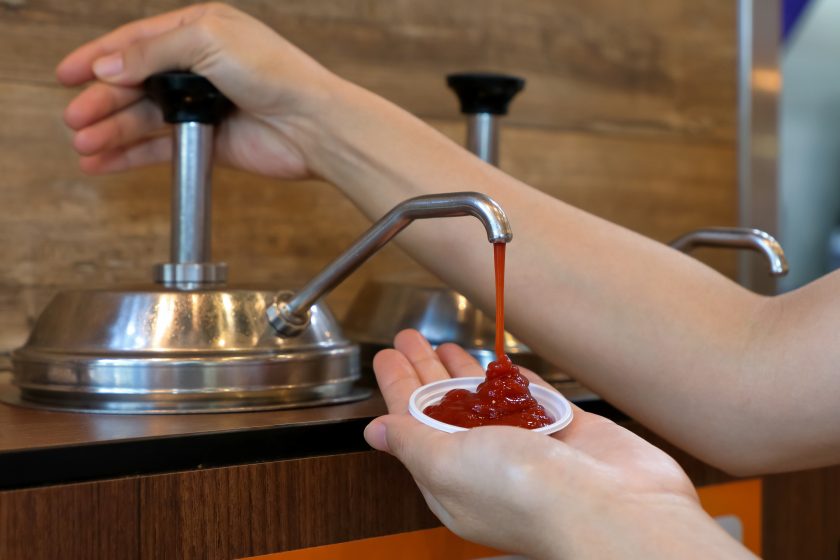 Franchise restaurants have learned to Pivot with a capital P over the past 14 months. They’ve added drive-through lanes and patios, digital and disposable menus, and facemasks for staff. Restaurants have punched up their capabilities for online ordering and delivery, created curbside pickup, and spaced out indoor dining for social distancing.

But two shortages, one new and one continuing, give independent and franchise restaurant owners a major case of heartburn right now: ketchup packets and workers.

The ketchup issue may sound funny and minor to non-restaurateurs, but it’s a major pain. Customers expect condiments to accompany their meals, and ketchup is a key player on everything from morning hash-brown potatoes and egg sandwiches to French fries, burgers, dogs, onion rings, chicken fingers, fried fish and more.

Demand has outstripped the normal supply, leading to a 13 percent increase in the cost of ketchup packets since January 2020, as reported by The Wall Street Journal. That’s partly because people have gravitated toward takeout and delivery meals during the pandemic. But even now that dining in picking up steam, restaurants have shifted to provide disposable packets, as opposed to bottles on tables, as recommended by health and medical experts in order to curb the spread of the Covid-19 virus.

Heinz, the nation’s largest producer of ketchup packets, recently announced that it has bumped up production by 25%, said Steve Cornell of Kraft Heinz. That will bring the company’s output to 12 billion packets per year. And to reduce the need for packets used by customers who dine inside restaurants, Heinz began offering a touchless dispenser late last year.

The worker shortage poses a longer-lasting problem. It arises from a wide range of causes, many of them related to low pay and limited benefits generally offered at restaurants. For instance:

Some of the above issues should resolve when federal benefits expire and the nation reaches herd immunity through a combination of vaccinations and recovery from the virus. In the meantime, what can a restaurant franchisee do to mitigate the worker shortage? Online research turns up some creative possibilities for restaurant owners to try in order to improve hiring as well as employee retention:

Previous ArticleInvesting in a Franchise – Where Do I Start?Next ArticleHere Is How to Ensure That Your Indoor Space Is Properly Disinfected