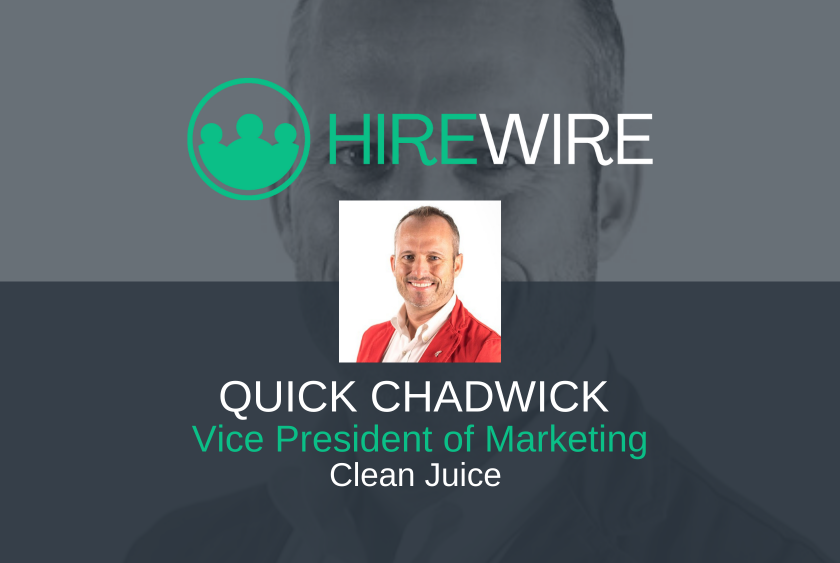 Clean Juice has promoted Quick Chadwick to chief marketing officer for the 8-year-old company, which is the only U.S. Department of Agriculture-certified organic juice bar franchise and quick-service restaurant. Chadwick will head up marketing and public relations efforts for Clean Juice and its sister company, Freecoat Nails, a nontoxic nail and beauty service. Landon and Kat Eckles founded both franchises.

Landon Eckles, CEO of Clean Juice and Freecoat Nails, said he and his wife “as well as the entire Clean Juice and Freecoat Nails family, are very proud of Quick’s contributions and accomplishments tied to the rapid growth our brands have enjoyed. Quick brings a level of expertise, drive and passion that is unwavering. We are inspired by his commitment and proven ability to continue the forward momentum we’ve ignited as we enter another year of record-breaking growth.”

Chadwick, who holds an MBA from Mercer University’s Stetson School of Business and Economics in Georgia, previously had notched four years as vice president of marketing for Clean Juice. “I am extremely proud to be a part of the Clean Juice family, where I’ve been a part of helping build a brand built on core values and its walk-the-walk focus of Healthy in Body, Strong in Spirit for all people and communities within Clean Juice Nation,” according to a news release about his promotion.

He said he was attracted to the company by its core values and because he enjoys building from scratch. “I love creating,” he said in the news release. “This is my third franchise marketing department I’ve had the privilege of creating.”

Clean Juice had only 42 stores when Chadwick came aboard in October 2018. He was instrumental in growing the brand to its present total of 121 stores and 100 franchise partners across 30 states. The brand currently has 70 Clean Juice stores in development and is seeking more franchisees.

He had worked at an ad agency and in sports marketing before moving into the franchise arena. “I love people, so franchising gives you the opportunity to impact many different owners/franchise partners and that’s truly what I love – serving them,” said Chadwick, the married father of three.  In 2014, the Eckleses started Clean Juice, a franchise that emphasizes the importance of an organic, plant-based diet. The juice bar franchise offers organic cold-pressed juices, smoothies, açaí bowls, salads, sandwiches, wraps, and other healthy foods in a warm and welcoming retail experience. It has won several franchise industry accolades, two recent honors being No. 154 in Entrepreneur magazine’s 2021 Franchise 500 rankings. The company landed the top spot on Franchise Gator’s 2021 list of fastest-growing franchises. The couple founded Freecoat Nails in 2017.

What Food Franchises Does Shaquille O’Neal Own? 35142

Why is Chick-fil-A Better Than McDonald’s? 5725