“The acquisition is a natural fit for both brands,” said Capriotti’s CEO Ashley Morris, who pointed out that the companies share the “same internal values and organizational goals.”

Geared toward college students, Wing Zone had system-wide U.S. sales of $22.2 million in 2019, down more than 12% from the year before, according to Technomic, a sister company to Restaurant Business. Wing Zone was founded in 1991 in Florida. 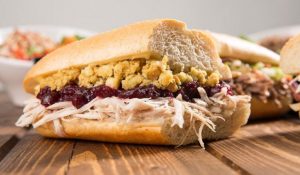 Fast casual restaurant Capriotti’s, which aggressively advertised its contactless delivery and curbside pickup capabilities during the past year, performed well in 2020 despite the pandemic. According to the company’s statement announcing the Wing Zone purchase, Capriotti’s reported double-digit same-store sales increases in 2020. It has 115 locations, with 18 new shops opening in 2020 and 30-plus additional locations in the works for 2021.

Capriotti’s is known for its sub sandwiches that include turkey, tuna, sausage and vegetarian options. Its menu also offers an array of salads. Last year’s innovations by Capriotti’s, which was established in 1976 in Delaware, included the first Impossible Meat Cheese Steak and its partnering with Snake River Farms to introduce American Wagyu beef subs.

According to its statement about the sale, Capriotti’s Sandwich Shop leadership said the company had signed 24 multi-unit franchise agreements that would result in a total of 106 new restaurants across the United States in the coming years. Those future locations would be in new markets such as Miami, Philadelphia, Denver and New York City.

Both Capriotti’s and Wing Zone aim to please diners who appreciate innovative flavors and high-quality products whether dining in or off the premises. Capriotti’s is tech-focused while emphasizing infrastructure and profitability, and Wing Zone is known for its innovative delivery systems that cater to the rising demand for off-premise dining, the Capriotti’s statement said.

“We look forward to leveraging our expertise in franchising, operational excellence and technology with Wing Zone’s off-premise experience to help both brands continue to grow,” said Morris, who has served as Capriotti’s CEO since 2008 and will also become CEO of Wing Zone. “We are thrilled to welcome Wing Zone into the Capriotti’s family and are excited about what lies ahead.”