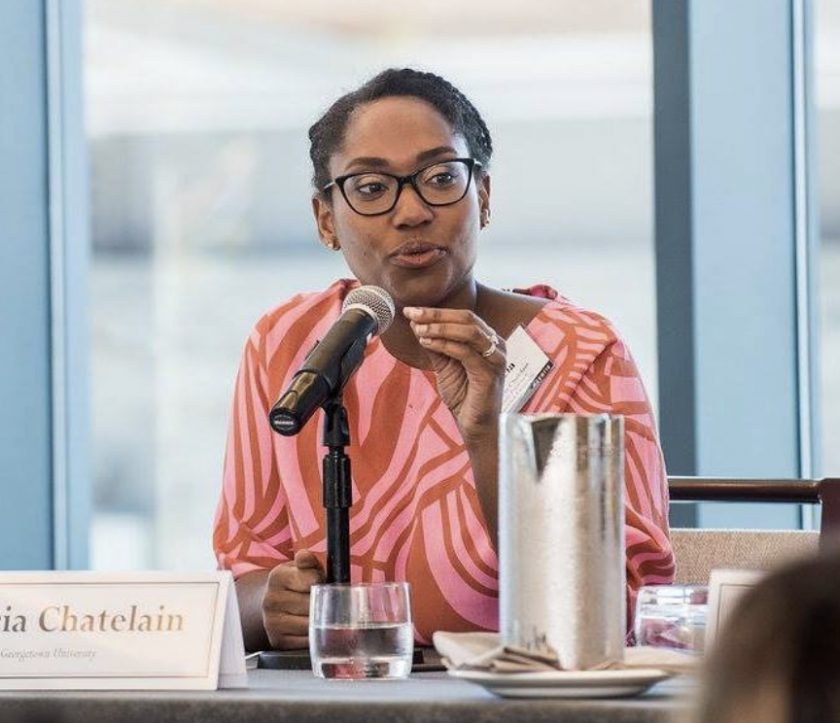 Dr. Marcia Chatelain won the 2021 Pulitzer Prize in history for her book “Franchise: The Golden Arches in Black America,” which examines the fast-food franchise’s effects on Black communities. The Pulitzer organization credits the book with revealing “the untold history of how fast food became one of the greatest generators of Black wealth in America.”

The Pulitzer board called Chatelain’s work “a nuanced account of the complicated role the fast-food industry plays in African American communities [and] a portrait of race and capitalism that masterfully illustrates how the fight for civil rights has been intertwined with the fate of Black businesses.”

An estimated one-third of all American adults eat something from a fast-food restaurant every day. For African Americans, Chatelain contends in her book, fast food is a source of despair and power — and a battlefield on which the fight for racial justice has been waged for decades. She is a professor of history and African American studies at Georgetown University; she holds master’s and Ph.D. degrees from Brown University in American Civilization.

The Pulitzer organization praised the book for its comprehensive history that documents how racial justice affects black businesses, starting with the first McDonald’s drive-in located in San Bernardino, Calif., in the 1940s. It moves on to cover civil rights protests at franchises in the American South in the 1960s and folds in the shooting of an unarmed black teen and subsequent riots at the McDonald’s on Florissant Avenue in Ferguson, Mo., in summer 2014. The organization further says: “Deeply researched and brilliantly told, ‘Franchise’ is an essential story of race and capitalism in America.”

New York Times critic Jennifer Szalai labeled the book “impressively judicious” and said the author’s perspective “gives this important book an empathetic core as well as analytical breadth, as she draws a crucial distinction between individual actors, who often get subjected to so much scrutiny and second-guessing, and larger systems, which rarely get subjected to enough.” Szalai also called the book “a cautionary tale about relying on the private sector to provide what the public needs.”

McDonald’s restaurants have helped Black entrepreneurs but have been harmful to Blacks in other ways.

“Franchise: The Golden Arches in Black America” points out that McDonald’s restaurants have helped Black entrepreneurs but have been harmful to Blacks in other ways. Chatelain said McDonald’s moved into low-income, heavily Black neighborhoods in the wake of racial unrest in American cities in 1960s and ’70s. As White Americans migrated to the suburbs, shops left with them. McDonald’s saw the vacated commercial spaces as ripe with potential for expansion while building good will by awarding franchises to local residents.

Black McDonald’s franchisees racked up one success story after another. By the late 2000s, Black franchisees tallied total sales of more than $2 billion.

With assistance from federal loans, Black McDonald’s franchisees racked up one success story after another. By the late 2000s, Black franchisees tallied total sales of more than $2 billion. Fast food represented an opportunity to get ahead for minorities who had previously suffered financially, with dim employment prospects, because of racism.

Black communities did not flourish along with the McDonald’s franchisees. Residents’ health suffered because of fast-food diets.

But Black communities did not flourish along with the McDonald’s franchisees. Residents’ health suffered because of fast-food diets; Black Americans are likelier to eat fast food than any other racial group in America, according to the U.S. Centers for Disease Control, in part due to those restaurants being concentrated in low-income and segregated areas. And while McDonald’s franchises brought jobs into Black communities, they were mostly low-wage positions with little opportunity for advancement.

“I think what McDonald’s has provided is an opportunity for some, at the expense of far too many … not just [because of] the health effects,” Chatelain told National Public Radio in January 2020. “I think anytime we have communities that have to rely on a business to be the place of refuge, to be the place for Wi-Fi, to be the sponsor of youth sports, to be the place where the youth job program happens, for the college scholarships to emanate from, then we have a problem.”

Previous ArticleMcDonald’s hit by data breachNext ArticleMT4 VS MT5: Which Forex Trading Platform Should You Choose?

What Food Franchises Does Shaquille O’Neal Own? 58033