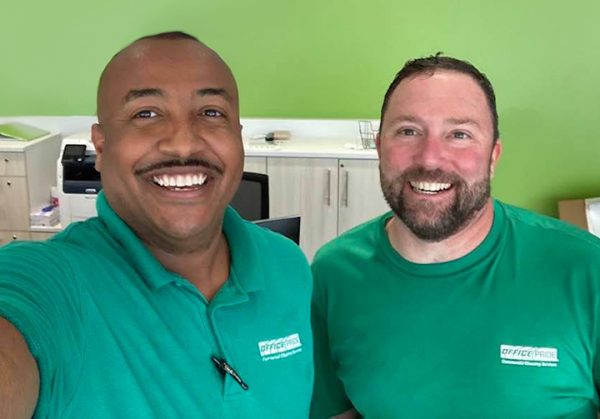 Veteran Franchisees Can Identify With the Values of Office Pride

Integrity, service and excellence are the core values Office Pride franchisee Marc Stewart (top photo, right) lived by during his 16-year service in the U.S. Air Force as an air battle manager. “It’s not just talk or a slogan,” he says. “We were trained in discipline. We lived by those core values because lives were at stake,” he says. That mindset remained with Stewart in civilian life and impacts all he does. So it’s not surprising that when he decided to open a franchise, he aligned with a company that had strong core values.

Stewart never considered commercial cleaning as an option until he heard about Office Pride. “At first I was attracted to Chick-fil-A because of its faith-based mission,” he says. But once Stewart dug deeper into the Office Pride opportunity, he recognized that it had a similar culture. “It was a business I could be proud of. We’re serving people by creating a safe and clean working environment,” he says.

Since Stewart opened for business in August 2021, he has always had somewhere to turn for help and guidance. “Besides the incredible support from the corporate team, I have also found a mentor in Titsworth. It’s great to know that I have people behind me who want to see me succeed,” he says.

Taking advantage of Office Pride’s military discount and proven systems has been a win-win for Stewart, who is looking forward to growing and scaling the business. “In the military, we’re checklist-heavy. It’s easy to succeed when it’s all laid out right in front of you,” he says.

What Food Franchises Does Shaquille O’Neal Own? 40018