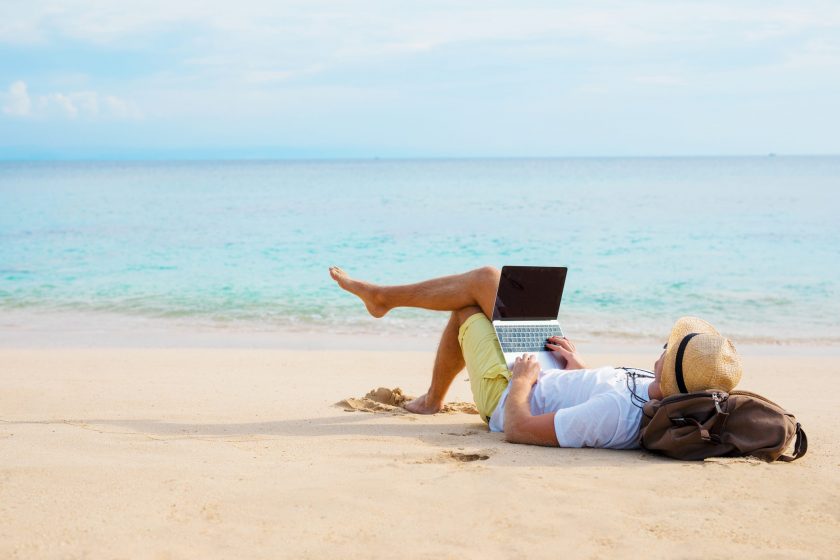 Since the pandemic, workforce trends (and TikTokers) have prompted marketers to employ a slew of new – and annoying, in my opinion – buzzwords. As we move into 2023, not only have we “pivoted” in the “new normal,” but we have been engaging in “quiet quitting,” “quiet hiring,” “acting your wage,” “rage applying,” and even “quiet layoffs.” Seriously???

The term “hush trip” recently came across my desk. What is a hush trip? From what I understand, it’s when a remote employee secretly takes a personal trip during a work week without telling his employer. Maybe it’s just me, but isn’t that a little immature? Have adults really resorted to sneaking around? To me, remote work implies working anywhere: at home, the local coffee shop, or at a beach rental. Why wouldn’t people disclose their whereabouts? Hush trips seem like a big hassle where you constantly have to hide the truth. For example, what do the hush trippers tell their bosses when their flights are delayed and they can’t make the staff Zoom meeting?

The funny part about the new hush trip phenomenon is that the travel industry is jumping on the trend. Forbes reports that rental agents and hotels advertise hush trip specials to remote workers. Remarkably, there’s a big market for secretive travel. I suppose being secretive is the new normal. After all, there’s quiet quitting, too.

Quiet quitting (or soft quitting) is another workplace trend where frustrated employees simply stop trying. They won’t quit, but instead, take a passive-aggressive approach to work frustration. These workers stay at the jobs they hate, put in minimal effort, set rigid boundaries, and never go the extra mile. Wow. Is that how people really want to spend their days? Apparently, a lot do. A Gallup poll reports that nearly half of the U.S. workforce engages in quiet quitting. If that’s not bad enough, there’s also a related workplace trend called “acting your wage.” What is acting your wage? It’s similar to quiet quitting, but involves putting in an equal amount of work to match your income. For example, if you’re at an entry-level salary, you put in an entry-level (or minimal) effort. Really? Have we become a society of apathetic people? Apparently so. According to a Gallup poll, only 33% of American workers are engaged in their jobs.

For people who are unsatisfied with their jobs but aren’t into quiet quitting or acting your wage tactics, there’s “rage applying.” This 2023 workplace trend describes disgruntled workers who send out their resumes en masse as revenge against their employers. The goal is to get a better salary and job. But is this a great solution to a negative work situation? It sounds like a crapshoot to me.

Almost daily, it seems there’s another new workplace trend with a matching buzzword. While marketers and TikTokers are having a field day with it, the reality is quite unsettling. The workplace doesn’t seem to be going in a good direction. Clearly, people are unhappy with their jobs.

At least some people are taking control and moving on. The Great Resignation is still going strong. According to the U.S. Bureau of Labor Statistics JOLTS report, 4.2 million Americans left their jobs in November, bringing the total for 2022 to 46.6 million. Sure, some uncertainty comes with quitting your job, but isn’t it better than resorting to hush trips, rage applying and quiet quitting?

You could say that buying a franchise is the ultimate workplace trend. It’s a wonderful way to gain control when you’re sick and tired of corporate America. While investing in a franchise comes with risks, they are calculated risks. Franchise owners benefit from training, support, a proven business model, and a built-in network of people to call on when they need advice.

In its 2022 Franchising Economic Outlook, The International Franchise Association reports that 775,000 franchise establishments support nearly 8.2 million direct jobs, $787.7 billion of economic output for the U.S. economy, and almost 3 percent of the Gross Domestic Product (GDP). That’s a lot of people who found success in franchising. Clearly, the franchise model is working.

Becoming a franchise owner means you can control your schedule — no hush trips required. Many franchise owners run their businesses remotely and come and go as they please — especially after the business is established.

Yes, franchise owners may work hard, but they create their own destinies. While quiet quitters put in minimal effort because they are unsatisfied, franchise owners hustle because they work for themselves. Unlike in corporate America, hard work is rewarded in franchising. There’s no room for quiet quitting and acting your wage. Best of all, you can reignite a passion for your work by investing in a franchise. Doesn’t that beat enduring a soul-crushing job where your only pleasure is getting one over on your boss?