Lisa Tully never considered owning a junk removal and hauling franchise when she started her search for a new business back in 2014. Moving from a career as an executive in information technology (IT), she wanted to try something completely different that was more meaningful than her role in corporate America.

Tully always dreamed of owning a bar and grill, but her husband, Bryan, who had retired from a career in law enforcement, didn’t love the idea. “We fall on opposite ends of the spectrum when it comes to strengths, weaknesses and personality. I knew that finding common ground would be challenging,” Lisa says.

The couple did agree on one thing: franchising was a great option. As part of their journey, they visited a franchise expo. While there, the College Hunks’ booth caught Lisa’s eye. “I loved the name and the branding. It seemed cute and funny, so we checked it out.”

The Tullys met College Hunks’ founder and CEO, Omar Soliman, who was running the booth at the franchise expo. “After talking to him, the idea of owning a College Hunks franchise went from a cute and funny idea to a real possibility,” Lisa says. “We were intrigued.”

After talking to more than a dozen franchisees in the system and also to co-founder Nick Friedman, the Tullys knew College Hunks was a great fit for both of them. “Across the board, I liked what I heard. I especially loved the culture. It was fun and focused on giving. By the time we went to the Discovery Day, we had already decided to move forward,” she says.

Lisa and Bryan opened for business in February 2015 and led the team of “HUNKS,” (movers and haulers) for the first two years until they needed more management help. As they grew into their three territories, they added 65 full- and part-time employees, including three operations managers and an office administrator, plus a fleet of 15 vehicles. Their son, Russell, has joined the team, earning sweat equity in the business. He manages the day-to-day operations and Lisa handles finance and marketing.

From her time in IT, Lisa was used to working in a male-dominated industry, and experienced no obstacles with College Hunks. “Gender has been a non-issue,” she says. In fact, the Tully’s territory is one of the top ten producers in the entire system.

Unlike with her former career, Lisa is fulfilled with College Hunks. “I finally feel great about what I do. You’d be hard-pressed to find such a mission-driven company in corporate America,” she says. “With this business, we have  opportunities to really make a difference. For me, that’s the icing on the cake.” 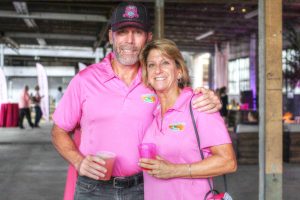 One of the reasons Lisa and Bryan Tully chose College Hunks is for the company’s fun culture and commitment to giving back. The Tullys carry that culture throughout their Jacksonville, Florida franchise. Their team participates in many charity events. At the Tacos for Tatas charity breast cancer fundraiser , Bryan and Lisa wore pink College HUNKS branded shirts (above). Team members regularly help the Donna Foundation with events that raise money for breast cancer. Above, Russell Tully (top, left) poses with his team.

Lisa and Bryan Tully’s Jacksonville, Florida, College Hunks location is one of the top ten producers in the entire franchise system.

Their secret to success? It’s simple: following the program. “We invested in a franchise for a reason. We just stick to the system and it works. It’s that easy,” says Lisa.

The Tullys have grown their business   through local marketing. “We park trucks in visible locations, use lawn signs, door hangers (pre-COVID), and even participate in guerrilla marketing. For example, we’ll have an employee dress as the HUNKS’ mascot and wave to people on busy roads (above).

“Strong female franchisees flourish within our culture and system.”