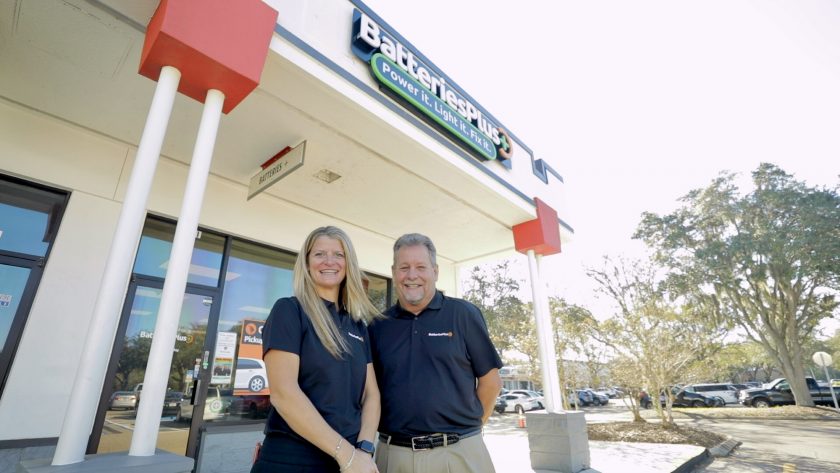 The Phipps are Multi-Unit Franchisees with the Batteries Plus Brand

After putting in the work to build their three Batteries Plus stores in Palm Beach County, Florida, Rick and Brenda Phipps now have a reliable staff who can fill in when they want to relax and take time off.

Back in 2005, the Phipps signed a three-store, five-year build-out development agreement and opened their first Batteries Plus location in Lake Worth, Florida in 2006. They opened their second and third locations in 2010 and 2011 respectively. Fast forward to 2021, and the couple is enjoying an ideal work-life balance. Brenda is present for all of their 10-year-old twins’ big and small moments. “I love the flexibility. If I want to take the day off to attend a field trip or class party, I can,” she says.

Before investing in their three Batteries Plus franchises, Rick and Brenda each had careers that ultimately gave them skills to help with day-to-day operations. Rick was the owner of multiple automotive franchises in Virginia Beach, VA. While there, he operated 21 stores and oversaw 300 employees over the course of 14 years before selling the business in 1998. Brenda’s former career was as a flight attendant where exceptional customer service was her top priority. She especially liked Batteries Plus because she related to the service component that came with owning a retail store.

Relocating to Another State

Although they considered other franchise opportunities, once the couple investigated Batteries Plus, they were sold. “We lived in Virginia Beach at the time and had difficulty finding a laptop battery,” Brenda says. “We asked around and were referred to the local Batteries Plus,” she says. The couple was impressed with the service and saw the benefits right away. “Batteries are a commodity and people are always going to need them,” Brenda says.

Because there were no territories available in their Virginia neighborhood, Brenda and Rick decided to relocate to Florida in order to open three stores that were in driving distance to each other.

The couple shares in the day-to-day responsibilities and each gravitates to the duties they enjoy most. “Rick, does P&L statements and scheduling, while I focus on HR responsibilities, sales tax and banking,” she says.

For their first five years in business, Brenda spent a lot of time working in the stores, but now works from home when she likes. “I love the flexibility,” she says. Even though the stores are only closed four days a year, Brenda and Rick typically take weekends off. “Thankfully, we have an amazing team of 18 employees, many who have been with us a long time. They step up as needed and I am very thankful for that,” she says.

Making a Difference Through Franchise Ownership

The couple enjoys helping their community through the business and has a lot of opportunity to do so thanks to Florida’s numerous hurricanes. “During hurricanes we will stay open late and come in early to make sure our customers have what they need during the storm,” she says. They also contribute to several charities including Toys for Tots and the Juvenile Diabetes Research Foundation.

Brenda’s experience as an international flight attendant was a natural fit for franchise ownership. “Excellent customer service is the top priority in both functions,” she says. “Batteries Plus, in particular, is all about service,” she says.

The service-first mentality is ingrained in Brenda’s entire staff. “I tell my team to always put the customer first, be honest and never sell anyone a battery they don’t need. When the customer does need it, he will be back,” she says. “We have a saying that we often use with our staff: ‘Always do what’s right when no one is looking.’

Batteries Plus solution-based service model sets the brand apart. Here are just some of the reasons Batteries Plus franchisees have enjoyed long-lasting success.

What Food Franchises Does Shaquille O’Neal Own? 34847