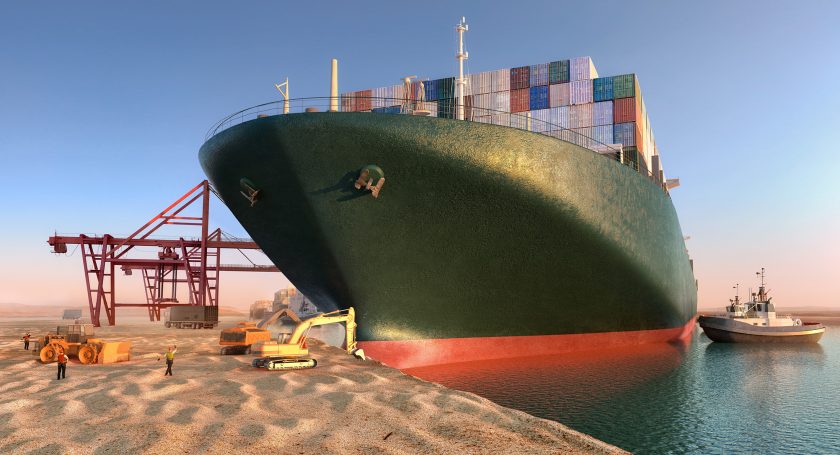 That giant container ship that was stuck in the Suez Canal, blocking the vital shortcut between Africa and Asia for six days, has caused a nightmare for supply chains to giant corporations, franchises of varying sizes, department stores, home centers, and even mom-and-pop shops. CNBC reported that each hour that the ship was stalled, it delayed $400 million in goods.

It took about six days to free the ship, with the effort helped along by a high tide on Monday. Behind that one humongous ship, the Ever Given – which is longer than the Empire State Building – were dozens more ships, many of them almost as large and just as heavily laden with cargo. Think clothing, furniture, paper and plastics, toys, raw materials for manufacturing, natural gas, petroleum and even perishable foods… Well, you get the picture: just about anything and everything.

Franchisors depend on timely, predictable, and safe shipments of high-quality goods that they in turn supply to their franchisees. Often both the franchisor and franchisee need a quick turnaround on orders. But even if the product pipeline isn’t fast, it needs to be steady and reliable.

The supply chain isn’t something glamorous to talk about, but according to an article on Franchising.com, “Implementing an effective supply chain is one of the most important things a franchisor can do to promote the success of the franchise system and its franchisees.”

The franchisor may be counting on its supply chain for products placed on shelves and websites; packaging supplies; equipment (such as for gyms and kitchens); paper goods for restrooms; dietary supplements; computers; preserved foods such as canned goods, sauces and condiments; and on and on.

In normal times, when no ship blocks the Suez Canal for nearly a week, the supply chain hums along unnoticed. But when it’s disrupted, trouble is brewing. That’s because a well-oiled supply chain not only keeps tarnish off the brand, it can polish the brand. But if mission-critical goods were on a ship heading through the Suez Canal in late March, delays will probably be unavoidable and contingency planning will be important.

If franchisees get in a bind because of one or more shortages, franchisors will need to step in with ways to keep the business owners and their customers happy, perhaps by moving some products around (a surplus at one franchise location gets shifted to a site that’s running low) or coming up with stopgap substitutions. A certain product or service might even need to go on hiatus for a while.

Such plans are crucial to avoid tarnishing a franchisee’s reputation and/or the brand and losing customers permanently.

Communication among all those affected by shipping delays will be vital as waylaid shipping traffic will return to normal slowly. The World Shipping Council told CNBC that each day the Ever Given was stuck will mean a day to clear the backup of ships behind it. So it’s not going to be like flipping a switch; instead it will be more like recovering from a severe case of the flu.

This means that shipping schedules could begin to normalize starting the first weekend in April.