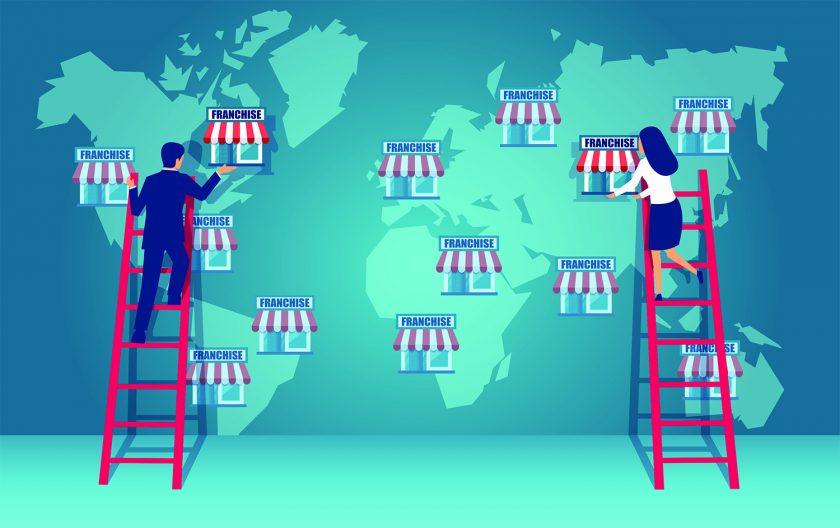 International Expansion is a Great Way for Franchisors to Reach New Markets, but There’s a lot to Consider

If you keep up with franchise news, you may have noticed that many high-profile brands have expanded internationally. It’s a logical way to move into new markets, potentially building value and brand recognition. These franchise brands recently have made news with international expansion:

On its face, a franchise’s international expansion seems to be a no-brainer method of increasing sales – after all, franchisors can reach a previously untapped customer base. Driving this rationale may be that the franchisor has saturated the market or markets where it’s currently doing business.

A foray into foreign markets, especially if accomplished before a key competitor plants its flag, can be a shrewd move. And once that move is executed with success, happy new customers can lead to referrals, more franchises and more revenue. That money can fuel further franchise growth, of course.

Considerable upfront research is required in international franchise expansions. That means a significant investment from the get-go. The most obvious focus, of course, must be investigating demand for the franchise’s products and/or services. A careful study of costs (including ongoing taxes and operating licenses) versus potential profits is another must. A franchisor also must consider the cost of failure and pulling out of a foreign market.

Any franchise expanding internationally must uncover and obey local laws and regulations. Immigration laws may pose a significant legal hurdle. There will also be nation-specific laws covering financial transactions, payroll, and intellectual property (recipes, formulas, trademarks, logos, software, and more). And, of course, there’s the all-important franchise agreement. The agreement should be reviewed by an experienced lawyer practicing in the relevant territory; the agreement must be tailored to laws and regulations in force in that area.

Less-tangible factors are cultural influences regarding how franchise sites should be run. These figure into selecting the most appealing products and services – and marketing them appropriately. Language differences will give rise to communication challenges that will affect the way to best train franchisees and managers, create a team-oriented work climate, hone customer service to perfection, and nurture community relations.

Any move into a foreign country will require experienced boots on the ground, such as lawyers, accountants, human resources specialists and possibly other compliance experts. These veterans can steer you past pitfalls that could interfere with replicating the business model that prospers elsewhere. The franchisees themselves may even help the franchisor develop products attuned to the local market. Adaptability is crucial.

Anyone who might invest in a franchise that is in the early stages of expanding internationally or one that’s making a major move into new global markets should be careful. The brand may be diverting a major share of human and financial resources to its overseas efforts, which could lead to its cutting corners in its domestic operations. The resulting problems could cause damage to the brand’s reputation – and therefore its value – short- or long-term. And it could mean that rookie franchisees who need guidance might not receive it as quickly as desired.

Those issues aside, foreign development has been fertile territory for North American-based franchises for decades. Entrepreneur has ranked the top 10 global franchises for investment, and five restaurants made the list. The magazine placed KFC at No. 1. It was followed by 7-Eleven, McDonald’s, Dunkin’, Taco Bell, Pizza Hut, the tutoring franchise Kumon, Hampton by Hilton, Anytime Fitness, and, at No. 10, Century 21 Real Estate.

No. 1 KFC began expanding internationally in the mid-1960s and now operates more than 24,000 sites in some 145 nations and territories. McDonald’s opened its first non-U.S. site in 1967 and now has some 38,000 restaurants in more than 100 nations. Independent owners operate more than 90% of McDonald’s restaurants. It did pull out of Russia in response to the invasion of Ukraine this year,   costing McDonald’s Corp. more than $1 billion.

Pizza purveyors have found fans all over the world. Pizza Hut was an early pioneer to expand internationally. As a tourist visiting Hong Kong in 1990, I was surprised to find a Pizza Hut, and I confess to buying a slice. Pizza Hut entered the Hong Kong market in 1981, and its first international expansion occurred 13 years earlier – a move into Canada. It has 18,000-plus locations in more than 100 countries. Domino’s, whose first non-U.S. venture was in Canada in 1983, represents another international mover and shaker with more than 18,000 locations in 80-plus countries.

“The secret ingredient in American fast-food companies’ success is that they embrace and engage consumers in each culture they enter,” said Don Daszkowski, founder and CEO of the International Franchise Professionals Group (IFPG) in a The Balance Small Business article. “While they offer local consumers and travelers a taste of Americana, the companies that have had the most success in international markets have also adapted their menus and ingredients to meet the taste preferences of the local consumers, who then become their loyal customer base.” He points to a curry pizza in India as an example.

But other types of franchises have found firm footing abroad, too – Entrepreneur’s list bears that out, with 7-Eleven, Hampton, Kumon, Anytime Fitness and Century 21 showing a broad range of franchise successes. A few other examples: 45-year-old Chem-Dry, a home-services brand that includes carpet cleaning and boasts a presence in 50-plus countries; real estate sales franchises – Realty ONE Group (400-plus offices) and RE/MAX (more than 130,000 agents in well over 100 countries) also have profited from international expansion.

In addition to traditional methods of awarding franchises via international expansion, many brands employ master franchising to fuel growth. Foreign master franchise owners generally are charged a large fee to acquire a territory – sometimes a whole country – where they operate similarly to a franchisor.

They award franchises, collect royalties, conduct training and supervise their entire domain. Some open units, too. Usually, they are mandated to have a specified number of franchises under their wing. Global-franchise.com recently noted 10 master franchise deals that have occurred this year. Along with major fast-food brands such as Arby’s and Popeyes, tutoring franchise Mathnasium and three boutique fitness brands under the Xponential Fitness franchise umbrella are also expanding through master franchise agreements.