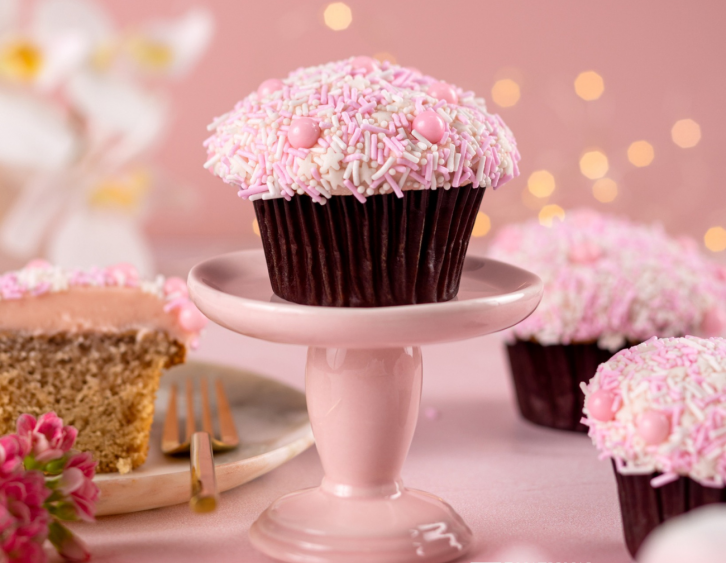 Whether you are at a birthday party, wedding, or it’s just another Tuesday, cupcakes make the perfect treat. Since their first mention in 1796 by Amelia Simmons, these delectable desserts have taken the U.S. by storm. Annually, Americans consume more than 700 million cupcakes. Everyone loves cupcakes because they’re portion-controlled, fun to decorate, make profitable businesses, and are inexpensive to make. Cupcake franchises have led to the success of many entrepreneurial bakers and dessert lovers alike.

But is owning a cupcake franchise right for you? There are pros and cons to consider before investing.

Pros to owning a cupcake franchise:

Cons to owning a cupcake franchise:

If owning a cupcake franchise is still tempting after considering these pros and cons, check out these 10 brands.

According to the Food Network, Sprinkles Cupcakes is “the world’s first cupcake bakery.” The cupcake franchise was founded in 2005 in Beverly Hills, Calif., and is famous for its fresh cupcakes, cakes, chocolates, and cookies. Through innovations like on-demand Cupcake ATMs, – which can carry up to 350 cupcakes at once – online ordering and creative flavors, franchisees have multiple revenue streams through merchandise sales, gift cards, at-home cupcake kits, and more. Unlike other franchisors, Sprinkles isn’t looking to have many franchise partners; it is looking for a select group of multi-unit franchisees throughout the U.S. and internationally with prior business experience. Franchise owners appreciate being able to give back to the community. With a core value of equality, Sprinkles has partnered with organizations including Los Angeles LGBT, World Central Kitchen, National Breast Cancer Foundation, Step Up, and Lupus LA.

The House of Cupcakes franchise was founded in 2008 by Ruthie and Ron Bzdewka in Princeton, N.J. The couple’s big break came when they won season two of the Food Network’s “Cupcake Wars.” Since then, the cupcake franchise has seen increased demand for its more than 40 flavors of cupcakes and other delicious treats. These include wedding towers, gourmet cookies with frozen centers, and push up cupcake pops for kids. The ideal House of Cupcakes franchisee is passionate and has strong leadership skills. Franchise owners have additional revenue streams through catering and House of Cupcakes Parties and Cupcake Decorating Classes.

The Wicked Good Cupcakes franchise was founded by mother-daughter team Tracey Noonan and Dani Vilagie. They opened the first Wicked Good Cupcakes location in 2011 in Cohasset, Mass. As word got out about their delicious cupcakes, they received orders from across the country. But receiving cupcakes in the mail that stayed fresh presented a challenge. Their answer was to put cupcakes in jars, and they debuted their creative solution on the popular show Shark Tank. Shark and Canadian entrepreneur Kevin O’Leary invested in the innovative cupcake business, and it took off. In November 2017, Wicked Good Cupcakes announced the launch of food truck-based franchises. This offers increased flexibility for franchisees.

The Gigi’s Cupcakes franchise is a boutique bakery known for its delectable cupcakes and cakes for any occasion. Since the opening of its first location in Nashville, it has expanded to 21 states with more than 50 locations. In addition to cupcakes, Gigi’s also sells brownies, cookies, and macarons. Franchise owners enjoy added revenue stream with a mobile app for easy online ordering.

The PinkaBella Cupcakes franchise was founded by Margo Engberg, who had a passion for baking since she was a child. PinkaBella started out as a cupcake company that catered to special occasions. It has since grown to multiple franchise locations in Washington state. Franchise owners can appreciate that PinkaBella has donated countless cupcakes to charities and partners with organizations including the Girl Scouts, Hopelink, Humane Society, Lake Washington High School Kang Football Association, and Make A Wish Foundation. Weddings are an added revenue stream for PinkaBella franchise owners.

The Yummy Cupcakes franchise specializes in gourmet cupcakes that can be enjoyed any day, not just on special occasions. The cupcake brand was founded by Tiffini Soforenko in 2004 and began franchising in 2011. Yummy has more than 400 ways to serve cucakes, including Cupcake in a Jar, Cupcake Truffle, Cupcake on a Stick, Cupcake Pies, Cupcake Truffle Pops, Cupcake Trufflicious, Cupcake Biscotti, Cupcake Push Pops, Cupcake Mini Bites, and so much more. The cupcake franchise is also aware of health trends and has sugar-free and vegan menus for health-conscious consumers. Franchisees benefit from investing in a proven system and should have strong leadership skills and be coachable. Yummy offers area developer opportunities and single-unit agreements.

The Nothing Bundt Cakes franchise was founded by Debra Shwetz and Dena Tripp in Las Vegas in 1997. What started as special treats for family and friends became a successful cupcake business with more than 430 locations across North America. Franchise owners enjoy a great work-life balance since the business operates with family-friendly hours. The ideal candidate has prior business and marketing experience, as well as leadership skills and the ability to follow a system.

The Cupcake Charlie’s franchise opened in 2008 on Cape Cod and is considered one of New England’s best bakeries. In addition to gourmet cupcakes, Cupcake Charlie’s also sells ice cream, cakes, cake pops, push pops, and other treats. The cupcake franchise was featured in the first season of The Food Network’s “Cupcake Wars.” The ideal Cupcake Charlie’s candidate has a passion for baking, business ownership, and great customer service. To keep customers coming back for more, the cupcake brand has special promotions like “Flavor of the Day,” “New Flavor Release,” and “Gluten-Free Fridays.” Customers also appreciate the cupcake franchisor’s vegan options. Franchise owners make additional revenue through merchandise sales and can give back to the community through fundraising opportunities.

The Smallcakes Cupcakery and Creamery franchise specializes in gourmet cupcakes that are presented in the brand’s signature pink box. The cupcake business was established by Jeff Martin and was featured on “Cupcake Wars” and the daytime talkshow, “The View.” Customers can’t get enough of the cupcake franchise’s 18 signature flavors including chocolate cream, peanut butter cup, pink chocolate, cookies-n-cream, and lemon drop. Smallcakes also offers ice cream, such as vanilla bean, salted caramel, birthday cake, and chocoholic. Franchise owners benefit from low labor and startup costs and a small retail footprint. First responders and veterans receive discounts on the initial franchise fee.

The Bliss Cupcake Café franchise is a boutique bakery specializing in gourmet cupcakes. In addition to cupcakes — which come in gluten-free and vegan options- Bliss’ menu includes cookies, macarons, edible cookie dough, and cupcakes for dogs. Each week, the cupcake brand announces special flavors on its website. Flavors include banana pudding, blackberry vanilla bean, and butter toffee. Bliss franchise owners benefit from multiple revenue streams, including online orders, wedding catering, and Bliss decorating parties. At a decorating party, each attendee gets a box with supplies and swag, including a branded cup, two cupcake toppings, a branded apron, and two pastry bags.