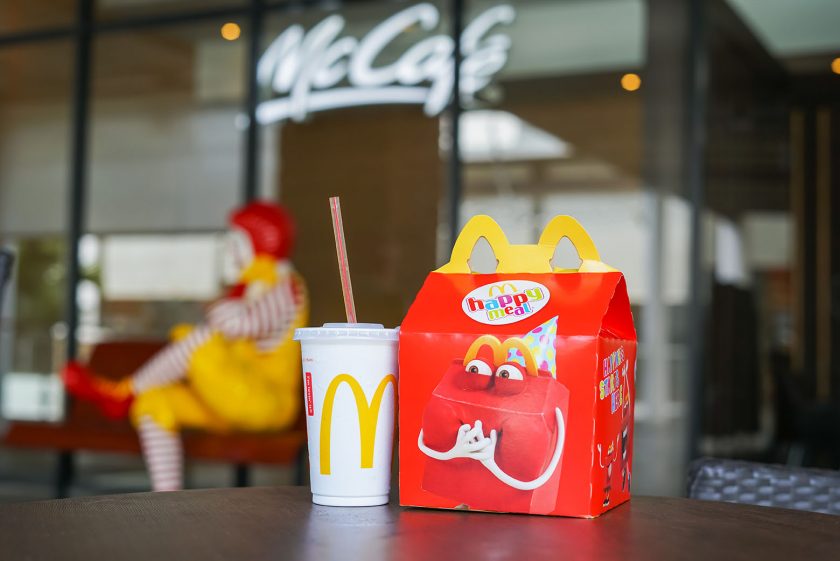 The Cactus Plant Flea Market apparel label has teamed with McDonald’s to put a special touch on blast-from-the-past Happy Meals. Birdie, Grimace and Hamburglar figurine toys will be resurrected as Happy Meal toys with a twist, and the new Cactus Buddy toy will be introduced. The iconic characters have been reimagined with four eyes, a signature visual of Cactus Plant Flea Market that’s popular with Gen Z.

The boxed meals will be available in the company’s 13,500 U.S. company- and franchisee-owned restaurants and via delivery beginning Oct. 3. The meal entrée will be a Big Mac or Chicken McNuggets; accompaniments are fries, a drink and one of the four figurines.

In a statement released by the corporation, Tariq Hassan, McDonald’s USA chief marketing and customer experience officer, said that with the Cactus Plant partnership, “We’re taking one of the most nostalgic McDonald’s experiences and literally repackaging it in a new way that’s hyper-relevant for our adult fans.”

As another facet of the marketing campaign, cpfmmcdonalds.com will sell hoodies and other merchandise offered in connection with the Cactus Plant Flea Market-McDonald’s undertaking. In addition, users of the McDonald’s app will be eligible to receive free T-shirts and other items.

Happy Meals, which debuted in 1979, contained a hamburger, fries, dessert, drink and small toy such as Birdie, an early-bird female character; the purple monster Grimace; and the greedy burger meister Hamburglar. The trio of beloved characters appeared with company mascot Ronald McDonald in television ads and in stores. Grimace kept his high profile even through this year, when Hollywood leading man Ryan Reynolds portrayed him in a McDonald’s Super Bowl commercial featuring Kanye West.

During the past few years, McDonald’s has launched several successful promotions and partnerships with celebrities and coveted cultural brands, including rapper Travis Scott, BTS and endearing Funko Pop! figurines.

McDonald’s has recently been wooing longtime fans by bringing back its Szechuan Sauce and experimenting with the return of the Steak Bagel sandwich on its breakfast menu. It also has hinted on social media that it might resurrect its Snack Wraps after fans pushed for their return, according to thestreet.com.  Several unconfirmed reports also have teased the reappearance of McDonald’s plastic trick-or-treat buckets, which have been on hiatus since 2016. If the buckets do make an encore this fall, they are supposed to be available starting Oct. 18 in three designs, with one design per store at a time. The buckets will serve both as a toy and as the container for a Happy Meal, per internet scuttlebutt.

Previous ArticleWhat are the Best Vegetarian Franchises?Next ArticleIFA Hosts Annual Leadership Summit in Washington with 200-Plus Members of Congress