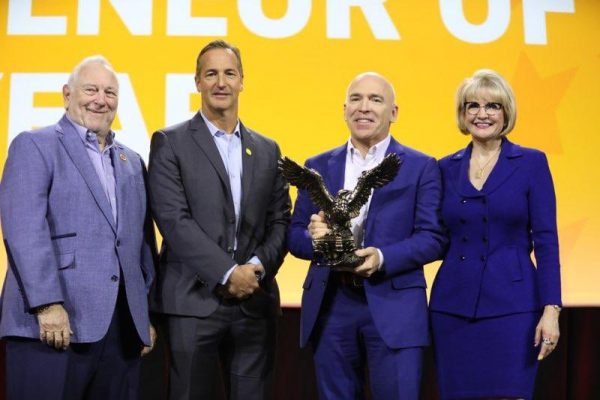 Barr, Along With Four Other IFA Honorees, Were Recognized for Outstanding Achievements in Franchising

Longtime franchise industry champion David Barr has been named International Franchise Association Entrepreneur of the Year. Barr is a high-profile owner of several franchises as well as managing director and partner in Franworth, a company that assists emerging and established franchises in reaching their goals.

The IFA named its 2021 award winners at its 62nd Annual Convention in San Diego. IFA President and CEO Matthew Haller said Barr and the franchise industry achievers made a lasting impact on the future of the business model. “It is our hope by recognizing them today, we will inspire entrepreneurs to realize the opportunities that franchising provides in the way of jobs, service, and economic growth,” said Haller.

The Entrepreneur of the Year award program began in 1982. It is a tip of the hat to a person who is building a successful business venture. Franchisors, franchisees and suppliers who exemplify the entrepreneurial spirit of franchising are eligible for the award.

Barr’s achievements include his past and continuing efforts in nurturing multiple brands and advancing the industry as a whole. He has served as IFA chairman and owns several franchise units: 39 KFC and Taco Bell restaurants, four Capriotti’s Sandwich Shops, and three Spice & Tea Exchange stores, all of which came on the heels of his success with Great American Cookies. He is board chairman of Your Pie (fast-casual pizza franchisor) and on the board Capriotti’s, Chicken Salad Chick, Dogtopia (dog daycare), Domino’s Pizza – China, and Outwest Restaurant Group (a franchisee of 89 Outback Steakhouse locations). Barr is known for giving astute advice in helping franchises maximize their success.

Through Barr’s work at Franworth, a franchise growth equity firm, he leads brands toward innovative solutions and offers counsel to help franchisors expand their footprints and reach their full potential in the marketplace. Mentorship of founders and franchisees represents a large part of the Franworth mission. Barr, a high-energy, charismatic speaker, has gone on record as never planning to retire 100%: “I like to be intellectually engaged.”

Barr has a high-profile partner at Franworth: retired New Orleans Saints quarterback Drew Brees, who has made headlines off the field with his varied franchise investments. The company was founded in 2015 by John Rotche, who serves as CEO and managing director.

Past IFA Entrepreneur of the Year recipients are diverse, including MOD Pizza executives Scott Svenson, co-founder and CEO, and Ally Svenson, chief purpose officer, in 2020; Self Esteem Brands’ Chuck Runyon and Chuck Mortensen in 2019; David Long of  Orangetheory Fitness in 2018; Huntington Learning Center founder Eileen Huntington in 2017; and Sport Clips’ Gordon Logan in 2016.

This award recognizes women who serve as role models for all, and particularly for other women, by their business and professional accomplishments within franchising and giving back to society. Tripp began franchising in 2007, taking Nothing Bundt Cakes from one site to 400-plus in 40 states and Canada. Her emphasis on quality, service and family as core values of Nothing Bundt Cakes has led to about 90% of Nothing Bundt Cake bakeries being female-owned. Tripp has been instrumental in mentoring and assisting women in launching bakeries.

This award recognizes an organization or individual who has made major contributions to minorities and diversity, equity and inclusion within franchising, through their company or through the franchise community as a whole. Williams, who heads Global Franchising at Yum! Brands, prioritizes education and opportunity for everyone. She facilitated sales of U.S. Pizza Huts to diverse franchisees and launched Mosaic, a multicultural underrepresented employee resource group that includes workers from Pizza Hut U.S., Pizza Hut Global, and KFC Global divisions. She also helped launch the Yum! Center for Global Franchise Excellence at the University of Louisville, which focuses on educating women and underrepresented people of color about the opportunities in franchising.

William Rosenberg’s vision led to the establishment of the IFA Foundation, and this award is reserved for a person who has been highly effective in franchise education, outreach and sharing the franchising story. Logan has been a strong advocate for veterans in franchising through his work with the IFA’s VetFran program and his commitment to advancing veterans’ causes. His franchise helps veterans realize their dreams of business ownership, and he gives back to veterans through philanthropy and community service.

Dwyer-Owens’ values-driven company began as The Dwyer Group, which was founded by her dad, Don Dwyer. She was hailed for providing opportunities to others through franchising. Many companies under the Neighborly umbrella provide home services. You can read the full story on her achievements here.