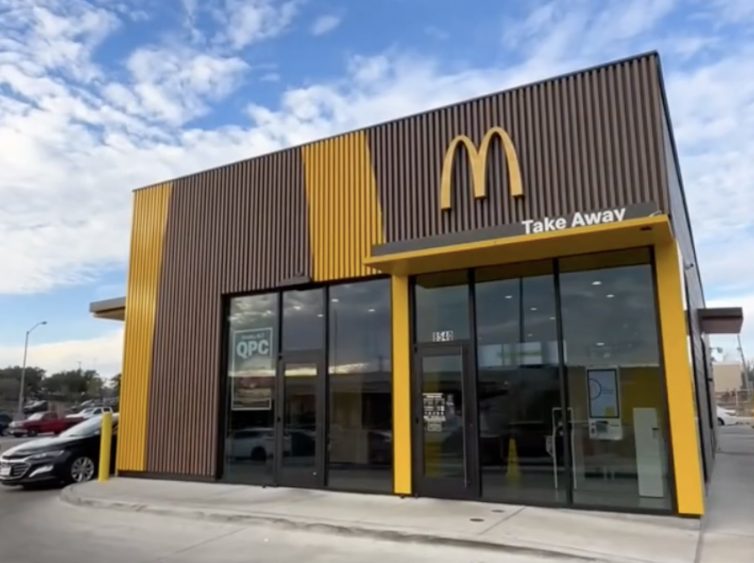 McDonald’s new experimental restaurant in Fort Worth, Texas, eliminates face time with humans. 100%. Customers place orders at kiosks or through an app, and a conveyer belt sends the order to a drive-through window. Humans do toil in the kitchen, however, cooking as the orders arrive.

A recent blog post by the franchisee who operates the McDonald’s test restaurant described the automation as part of an effort to find “new ways to serve faster and easier than ever.” Customers aren’t so sure.

Although the automated McDonald’s has a restroom, the downsized restaurant is designed for grab-and-go meals; it has no seating and no tables. Customers can pick up their orders inside or at a drive-through window.

McDonald’s has stated that the Fort Worth site is still experimental and is part of McDonald’s Accelerating the Arches growth strategy that uses innovation to enhance consumers’ experiences.

On social media, customers fretted over the idea of getting an order corrected and how to request items such as extra ketchup. “If they forget an item, who are you supposed to tell, the robot? It defeats the purpose of using the drive-through if you have to go inside” for that extra ketchup, CBS News reported.

“Well there goes millions of jobs,” one commenter on a TikTok video said in response to announcements about the test site. “I’m not giving my money to robots,” another person wrote on social media. “Raise the minimum wage!”

In Texas, the minimum wage is the same as the national minimum hourly pay of $7.25. Estimates based on data from help-wanted website Indeed.com indicate that workers at Fort Worth McDonald’s restaurants have average hourly pay of $9.99 to $11.64, according to a MarketWatch report about the Fort Worth test restaurant.

Last year 5% of McDonald’s restaurants increased hourly pay to $13 an hour in order to attract new workers, the Houston Chronicle reported. Based on a special wage-expenses calculator created at the Massachusetts Institute of Technology, a single adult with no kids needs to earn at least $17.03 per hour in Fort Worth to maintain an acceptable standard of living, MarketWatch said.

Franchisee Keith Vanecek, who operates the test restaurant, countered the criticism in his blog post: “The technology in this restaurant not only allows us to serve our customers in new, innovative ways, it gives our restaurant team the ability to concentrate more on order speed and accuracy, which makes the experience more enjoyable for everyone. He told Marketwatch: “I am immensely proud to have this new restaurant concept serving our customers in the Dallas-Fort Worth Metroplex.”

The automated restaurant reflects many companies’ challenges with a dwindling labor pool and rising wages. Continuing technology upgrades reduce the required numbers of employees – think of self-checkout that is now prevalent at big-box stores and supermarkets and also the robotic fry cooks in use at certain Jack in the Box locations.  Some labor experts have indicated 10 million jobs face extinction because of automation during the next few years, according to CBS.

How Does Automated McDonald’s Work?

Food blogger Foodie Munster showed his experience in videos posted to TikTok and Instagram, the Houston Chronicle reported.  “McDonald’s may be changing forever,” Munster said in his Instagram video, which has been viewed tens of thousands of times. “I got to say it worked pretty well, but of course, I did have to unbuckle and reach over to grab my food” after entering a code for the order.

Some customers seem open-minded, expressing the hope that automated restaurants could improve service. But others brought up McDonald’s ice cream machine debacle. “Yeah but the ice cream machine is currently broken,” one person joked in a tweet.