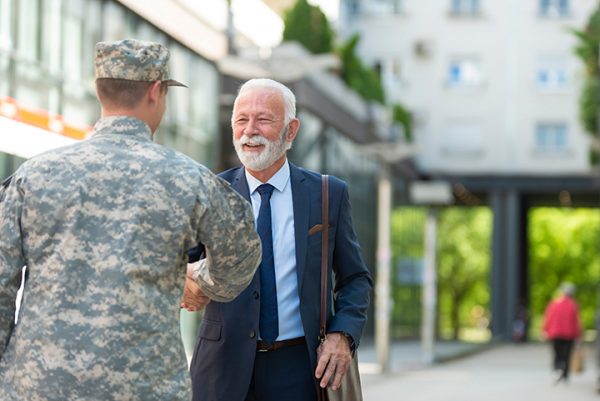 A Look at Franchises That Offer Veteran Discounts

Franchising and veterans go hand in hand because the two share the same values of hard work, dedication, and commitment. According to the International Franchise Association (IFA), one out of every seven franchises is veteran-owned. Franchising.com reports that more than 1 million veterans will be transitioning out of active duty in the next few years and will be looking for a second career.

Veterans are often the top performers in franchise systems because they are mission-driven and have been trained to follow systems — the key to success as a franchise owner. Knowing this, there are many franchises that offer veteran discounts. They typically offer discounts on their initial franchise fees to recruit veterans and also to thank them for their service. Below is a list of ten veteran-friendly franchises, as well as the discounts they offer. While most franchises that offer veteran discounts give a 10 percent reduction off the franchise fee, some go the extra mile with larger incentives. They are listed below.

Founded by U.S. Airforce veteran Gordan Logan, SportClips is a hair-cutting franchise known for its veterans’ support. The company offers veterans 20% off their initial franchise fee. The company helps veterans in other ways, too, including its Help A Hero scholarship initiative.

The auto repair franchisor takes a generous 50 percent off ($17,500) of the initial franchise fee for honorably discharged veterans.

PuroClean is led by U.S Army veteran Steve White who also serves as the Chair of VetFran, an inititaive by the IFA to support veteran franchise ownership. The restoration franchise specializes in water, fire and smoke damage restoration, mold removal, and biohazard cleanup. It offers military veterans 25% off of the initial franchise fee.

UPS is well-known for its veteran support. According to the company’s website, within The UPS Store network, there are 223 veteran franchisees operating 432 UPS Store locations. Although they usually offer a discounted franchise fee to veterans, this year the company ran a special promotion that completely waives the $29,950 franchise fee. The company also offers military discounts on shipping.

As a part of their mission to engage the best franchisees, Mathnasium offers qualified U.S. veterans and active military a full $10,000 off the initial franchise fee, which equates to a 25% discount.

The Dream Vacations Veteran’s Enlistment Package gives veterans the option to choose their own signing promotion. These incentives include a 30% discount off the franchise fee, a waived training fee for a business partner and travel discounts for military customers.

The residential cleaning franchise offers a 30% reduction in franchise fees for veterans. In addition, the company offers a diversity discount for women and minority franchisees.

With more than 400 locations in 23 countries, this B2B franchise specializes in hydraulic hose repair and replacement. Pirtek offers qualified veterans a 30% discount off the initial franchise fee.

This popular Mexican food franchise prides itself on its support of veterans. Qualified veterans can receive a 20% discount off the initial franchise fee of $30,000.